It is hard to believe that it is time to do another Blog and that we have been in Emerald a month already! As stated in our last blog, Tui is carting cotton and spent the first few days learning the different truck & trailer combos. There are 2 different types of bales that come off the Cotton fields, large round bales and trailer size square modules. 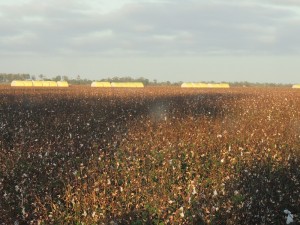 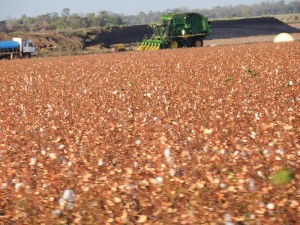 These photos are of paddocks that have been harvested.

The cotton is harvested then trucked to the Gin where the cotton is ginned to separate seeds from fluffy lint.  It is then packed into smaller bales and sent overseas for the final processing into the products we all know.  Tui is driving a Scania, the only one in the fleet that is manual. He started off with a flat bed single trailer. 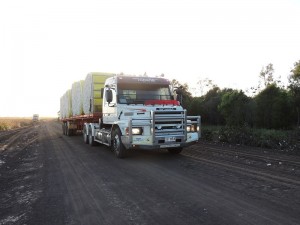 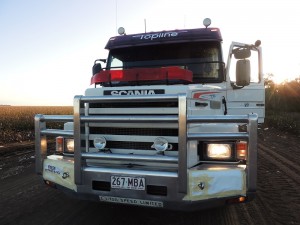 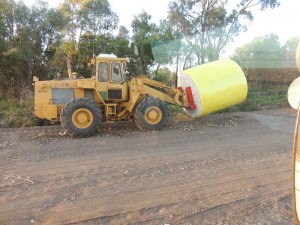 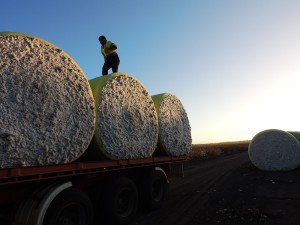 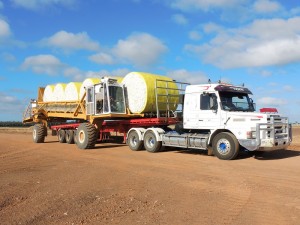 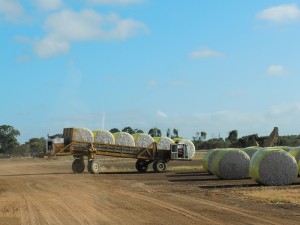 Above is the “Moon Buggy” unloading Tui at the Gin.

As you will recall Tui gained his MC (Multi-combination) license while we were in MacKay so next came the Road Train, 36metres in length.  He said he was a bit daunted to start with but was soon at ease driving it. 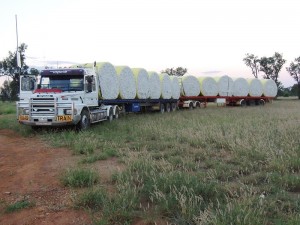 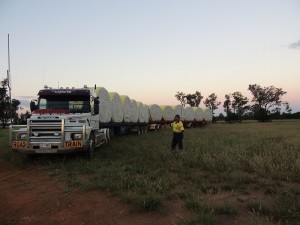 The square modules are loaded on chain bed trailers, no need for a loader driver. Wheels on the trailer move forward to tilt the trailer and a chain mechanism pulls in the module.   The module builder was developed in the early 1970s. This is a system in which cotton is dumped from the harvester into the module builder and the cotton compacted. Initially, modules were built on pallets made of either wood or metal. Further studies found that the cotton modules could be formed and stored directly on the ground without significant loss of cotton quantity or quality, so long as the ground surface was well drained. Tui currently has a chain bed trailer on his truck. 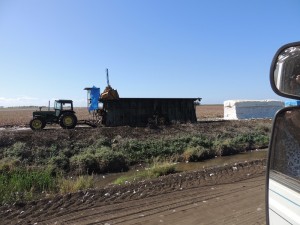 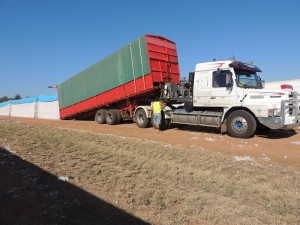 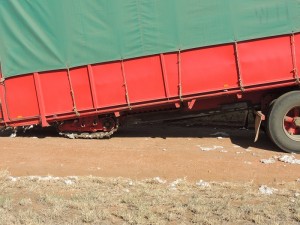 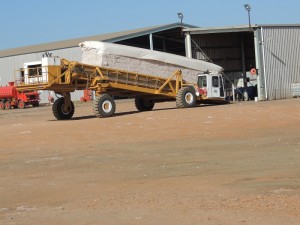 All of the boys had a Sunday off so along with Don & Sydnie, we went for a drive to Rubyvale and had lunch at the Pub. Rubyvale  is approximately 61 kilometres west of Emerald. Situated in a region called “the Gemfields”  sapphires are mined extensively in the area.  We visited this area on our way to Charters Towers in September 2012.  We had a good drive around and saw some interesting sites. 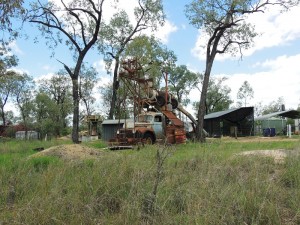 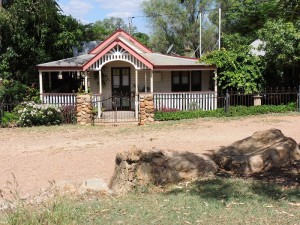 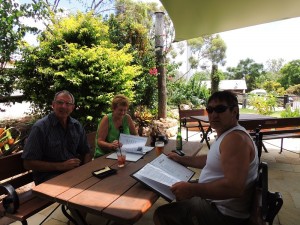 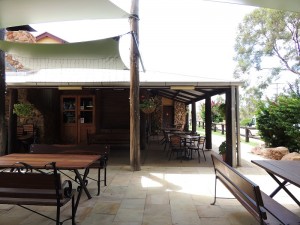 Now while the boys are away the girls will play!!  No not really!!  Sydnie & Jude did pack a lunch and take a trip out to Fairbairn Dam, about 25kms Southwest of Emerald.  Fairbairn Dam was constructed in 1972 across the Nogoa River “Gap” creating Lake Maraboon and is Queensland’s second largest lake. A little disappointing as the water had signs of Algae and the levels were really low.  Not to worry it was nice to sit and relax and have a picnic lunch in pretty nice surroundings. 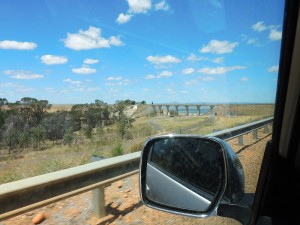 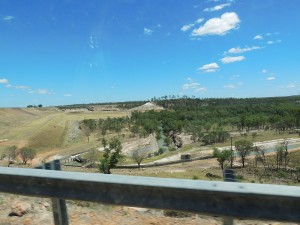 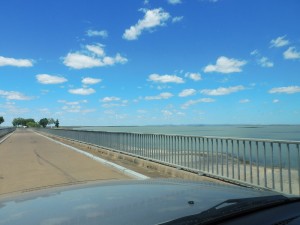 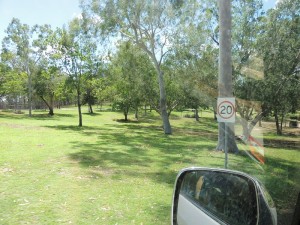 It just so happened that Don had a birthday on the 13th March and Tui on the 14th March so we planned to have a joint lunch (Don & Sydnie, Jill & Murray, Bill & us) on the Sunday.  However Don had to work on the Sunday so we made it Dinner instead.  Jude cooked a Roast Lamb in the Pizza Oven and made the famous Chocolate Mud Cake for a joint Birthday cake and Sydnie cooked Beef in the Weber and cut up a heap of salad ingredients which we had with fresh bread rolls.  Very yummy!! 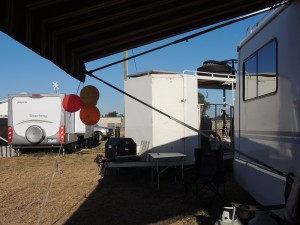 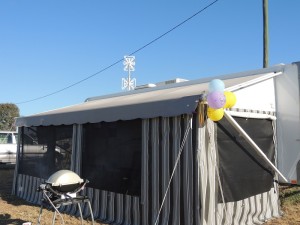 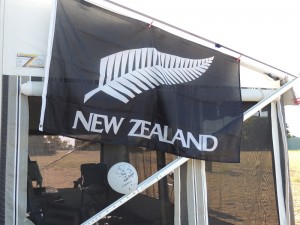 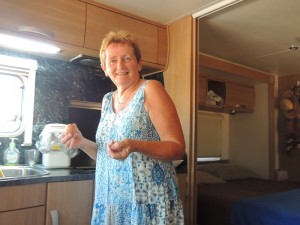 Sorry no photos of all of us.  Left the camera in Tiki Tourer!!  Duh!!  Not a late night.

Now our front Air con unit hasn’t worked properly for some time, no cold air.  We attempted to find someone in MacKay several times to no avail.  Anyway while Tui was getting new tyres on his truck, he was chatting away, as you do & the guy that was fitting the tyres knew of someone that had just started his own Business. Within a couple of days these two young guys rocked up to have a look.  They actually looked like a couple of policemen and if Jude hadn’t seen them pull up she probably would have freaked out!!  Bliss!!!  Within a couple of hours it was all fixed.  Reasonable rates too!! If any of you out there are around Emerald or the Gem fields and need someone to fix your air con give Jade a call from Gemlec on 0439 393 737. Highly recommended!!  It has been extremely hot here in the afternoons so being inside with the air con on has been a good option!!

We have beautiful sunsets here and an amazing array of bird life. 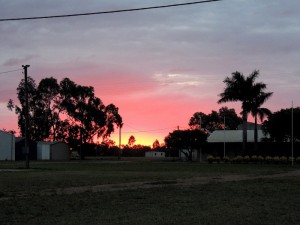 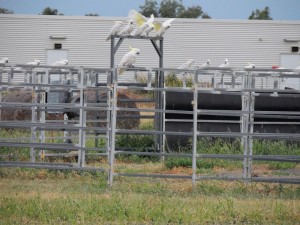 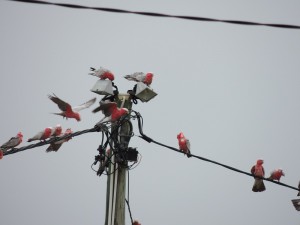 It appears that the cotton season isn’t going to be as long as we anticipated so we may not be here for much longer.  Tui needs a well deserved holiday so who knows whats next, you will just have to wait for our next Blog to find out!!!

Until then “Laugh more, live longer!!”