Yes, we are now in Moree, NSW but more about that later.  We all enjoyed The Ag-Grow grounds where we were camped in Emerald as it gave us a sense of a free camp environment, except for the water!  Very brown with a disgusting smell and undrinkable, hence the need to cart drinking water from a rain water tank a little walking distance from Tiki Tourer.  We decided to do the run into town and fill our water tank so that we could have decent water to shower with.  It gave us the opportunity of emptying our black tank on a regular basis as well. 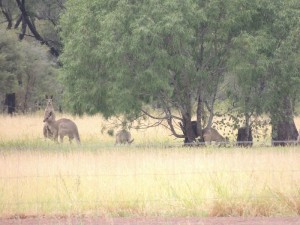 Jude & Sydnie started walking again and saw Kangaroos on a regular basis. Not up to 5kms a day yet but getting there without too many problems with the Archilles.

Tui managed to snap some shots on his phone.  Below is the harvester producing the round bales and the tractor going over the paddock after harvest. 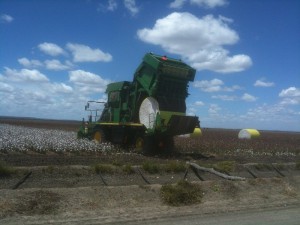 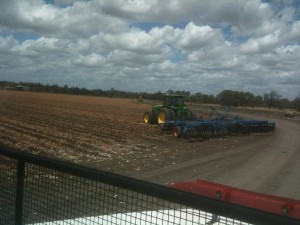 Storm clouds started brewing and it looked like we were in for a down pour! 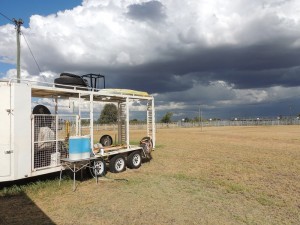 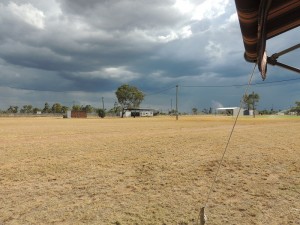 The rain went right round us but a Whirlwind came through and caught our awning.  It blew up with such force Jude couldn’t hold it resulting in ripped stitching and the hooks that attached the top arms to Tiki Tourer sheared off.  We will have to either get it fixed when we get to a bigger town or replace it.  Maybe time to get a new one that is a better colour to tone in!! 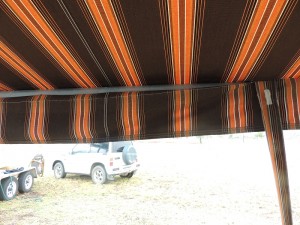 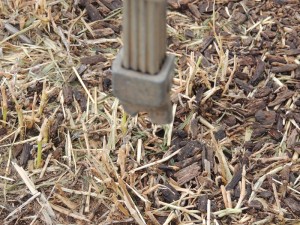 Whilst camped at the Ag-Grow ground, the district had a “Rainbow Run” to raise funds for cancer.  It was quite amusing sitting under the awning watching all of the weird & wonderful outfits go by.  They had a great turnout! 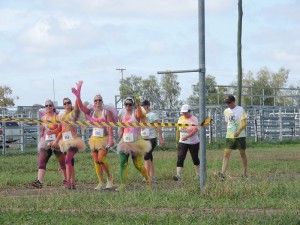 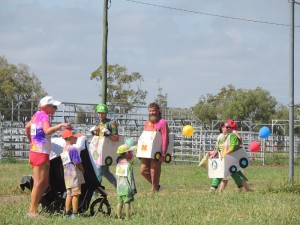 The plan was to cart cotton in Moree for Cameron Williams who the boys were working for in Emerald, however as it had been raining in Moree the boys had a couple of weeks just working in the shed.  Tui was browsing Gum Tree, as he does, in the search for another Suzuki.  Our poor old one is getting tired so time for an upgrade!  He spotted 2 in the Brisbane area, one near the airport and one in the Gold Coast.

We flew to Brisbane Tuesday morning on a 7.30am flight, jumped in a cab to see the 1st one, $58 later!  Tui wasn’t very impressed with that one, a 2002 with lots of stone chips under the guard.  Walked to the train station and off to the Gold Coast.  We arrived around 12.30pm, and by 2pm the deal was done and we were heading back.  It is a 2004 Suzuki, Auto, 3 door, silver and oh so much more comfortable to travel in. 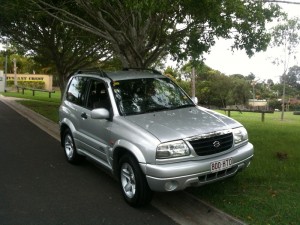 Tui was on a mission to get back in case the Moree job was happening so it was straight on the highway!  No thought of doing a “Dan Murphy” run or any shopping.  We got to Roma around 10pm and decided we had enough of driving but all accommodation was taken.  Back in the car drove until 1.30am then just had to have a rest.  We do not recommend sleeping in a 3 Door Suzuki!!!  Rather cramped but oh so buggard!  Woken by a Road Train stopping to check his tyres so off again, arriving back at Emerald 7.30am Wednesday  morning, exactly 24hrs!!

After having a nice cuppa it was off to our comfy bed, where we stayed until midday.  Tiki Tourer was out of water so into town to fill up followed by a much needed shower.  Poor old Suzuki was stripped out of bits and pieces the next day and is now “For Sale”. Anyone that knows of someone who wants a good reliable Suzuki let us know!! 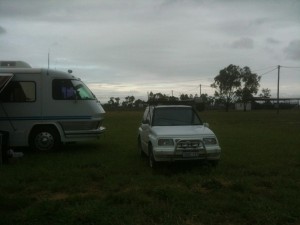 Only back a couple of days when we got the phone call that Moree was all go, 837km drive. Moree is a major agricultural centre, noted for its part in the Australian cotton growing industry which was established there in the early 1960s.  It is home to artesian hot spring baths which are famous for their reputed healing qualities.  As we had to take the Road Train down, we loaded the new Suzuki on the back and left Tiki Tourer in Emerald. 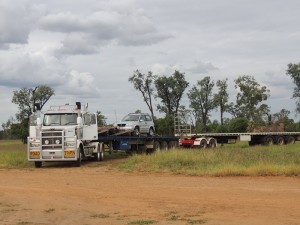 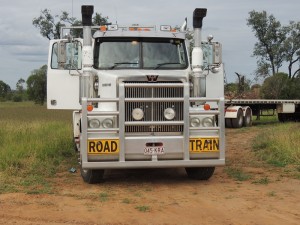 A convoy of two trucks leaving at 4am Sunday morning.  Murray & Jill in the lead truck and us following behind. We were amazed that in some areas there was red dirt just like northern WA. 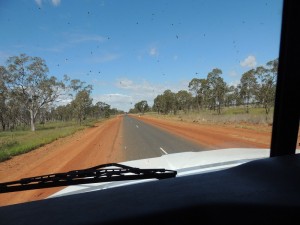 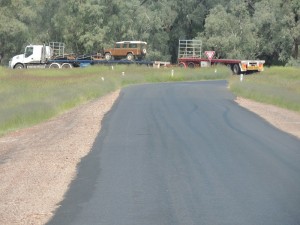 Arriving around 4 in the afternoon we went straight round to the yard to unload both vehicles etc. 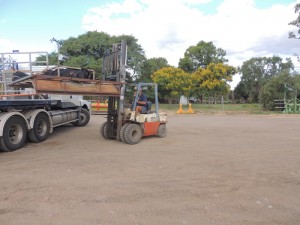 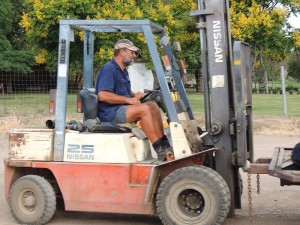 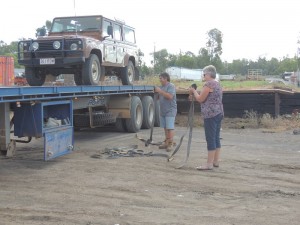 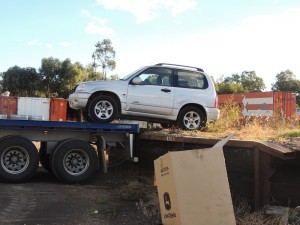 After a tiring day driving it was off to the Pub for a Pork Roast for tea.  Very nice and good buying at $13.50 each. 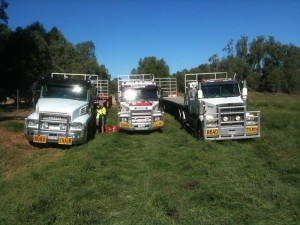 Sydnie & Don followed down on Wednesday in the third Road Train. It happened to be their Wedding Anniversary so we had a joint dinner with an anniversary cake (not home made unfortunately). 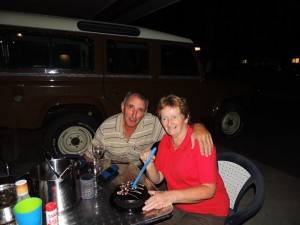 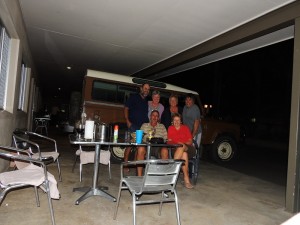 Moree is quite a nice little town with most amenities, Coles, woolworths etc.  Nice parks for our morning walks.  We are staying at the Econo Lodge Moree Spa Motor Inn, walking distance to the Pub, Hot Pools and the RSL.  The owner Mick Cikota & his wife are lovely friendly people and as today is Easter Sunday they are putting on a pig & lamb cooked on a spit. Smells divine!! What a fabulous feast.  The best homemade bread and doughnuts we have ever tasted thanks to Mick’s mum. 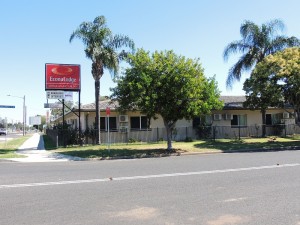 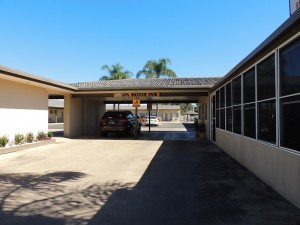 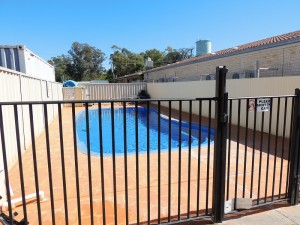 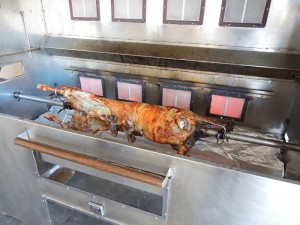 We have been in 3 different units so far, one of which had no cooking facilities, hopefully this is our last shift until we head back to Emerald. Still no indication of how long we are here so you will all just have to wait until the next Blog.  Until then “Laugh more, live longer”