Yippee!  We are actually on the road again!  Tui has worked almost constantly for 15 months and we are really in need for some R & R.  It is such a shame money is such a necessity!  Work was starting to take over!! Before we go on about our recent travels we will fill you in on the lead up! As we said in a our previous Blog, Moree is quite a pretty town with parks for our morning walks. 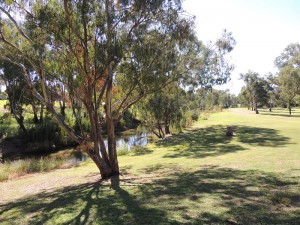 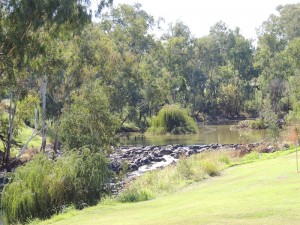 Tui had a couple of days off due to rain so we decided to take a run to Mt Kaputar.  It was approximately 129kms from Moree.  Towering forests, breathtaking rock formations and stunning scenery, a great day out. 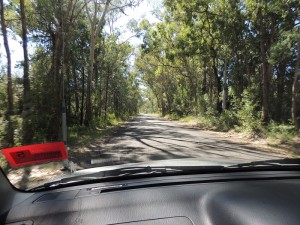 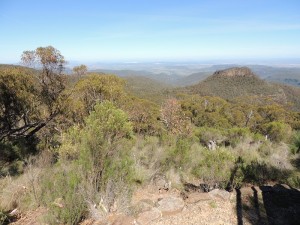 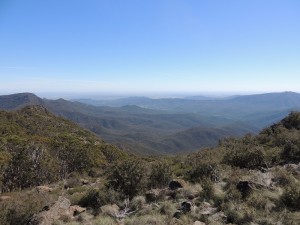 The day before we left Moree, Jude & Sydnie did a tour of the Peacan Farm, which is the biggest in the southern hesiphere.  Really interesting tour and highly recommended. 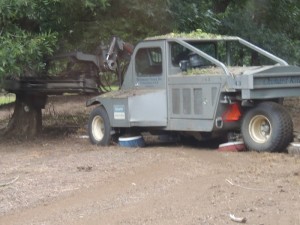 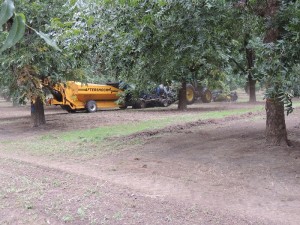 Ended up in Moree for approximately 3 weeks then they needed someone who could drive a Moon Buggy (unloads & loads the modules) and to drive a truck.  As Tui needed training to do this his put his hand up to go back to Emerald. It was sad to leave our mates Sydnie & Don behind! Cotton work was over but we still had to sell the old Suzuki.  As luck would have it a few days later it was sold!!

A great night with Jill & Murray cooking Jaffles (Quicksies in Kiwi language) on the fire.  The temperature had dropped considerably so the fire sure was nice. 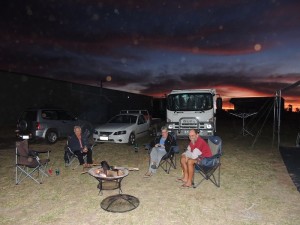 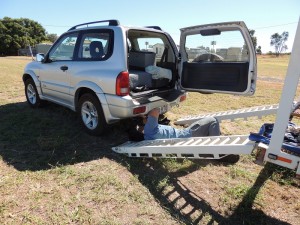 As luck would have it, our new tow bar arrived so Tui was able to install it while we waiting for old Suzi to be picked up. Time to get those wheels moving!  We headed out of Emerald Thursday morning after doing the usual things, filling with fuel & water and dumping our black tank.  The plan was to go as far as Barcaldine but as all you travelers know plans change.  Called in at Alpha for lunch and visited the information centre.  The lady there is awesome, a lovely person and it’s one of those quaint little towns that has real character. 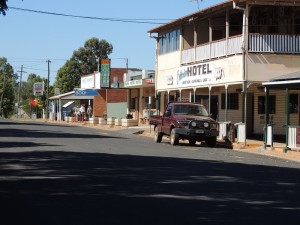 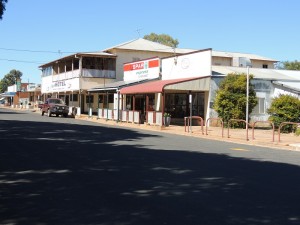 On arriving at Jericho we decided to check out the Free camp by the Jordon River.  Good choice, a nice spot and we met lovely people for Happy Hour. 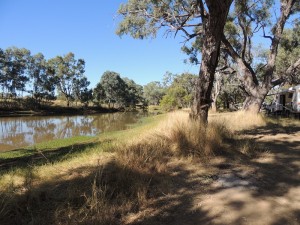 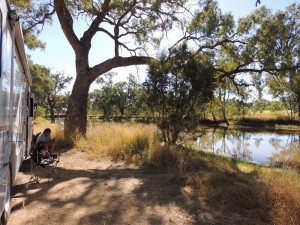 It was during conversation that we heard about the Ilfracome Cabins & Caravan Park, which is about 28kms east of Longreach. You can find them on facebook. We had planned on staying in Barcaldine but decided to have a look around and move onto Ilfracombe. 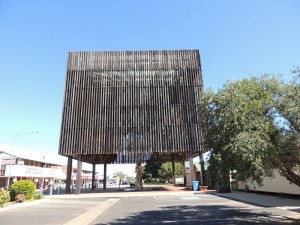 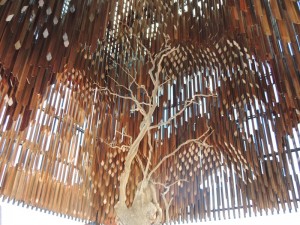 Above is the famous “Tree of Knowledge”  You can find out all about it on this web site: http://en.wikipedia.org/wiki/Tree_of_Knowledge_%28Australia%29.  Below are a couple of shots taken at one of the Pubs. 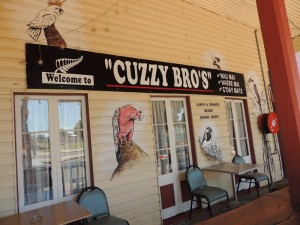 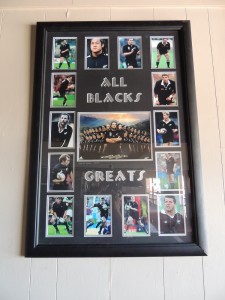 Ilfracombe was another great decision!!  It is truly a fun place to stay! 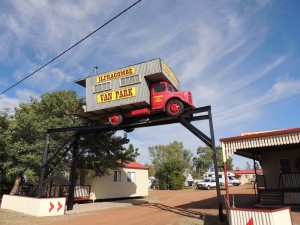 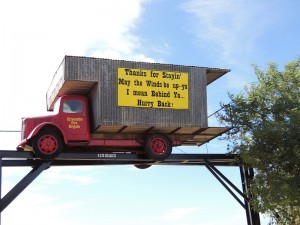 Their Happy Hour Shed is famous and Jessie & Kathy (the owners) put on quite a show of jokes and poetry most nights. Lots of laughs!! 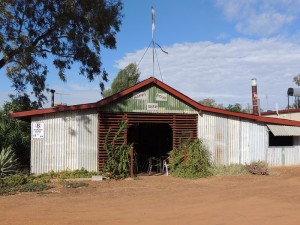 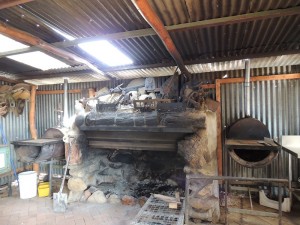 In fact we had so much fun that we stayed 3 nights and did some day trips in the Suzuki, more about that later.  Ilfracombe calls itself The Hub of the West. The main industry is sheep rearing, mainly for wool. In 1892, Wellshot was known as the biggest sheep station in the world, not because of the area it occupied but because of the number of sheep it ran; 460,000. So important was the property that Ilfracombe was known as Wellshot until 1890.  It is home to a collection of antique agricultural machinery and we were really impressed at the layout of everything.  The Wellshot Centre runs a video on a daily basis outlining the history. A worthwhile watch. 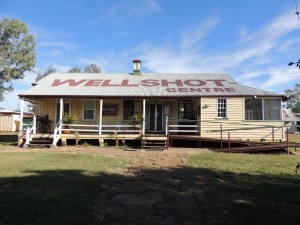 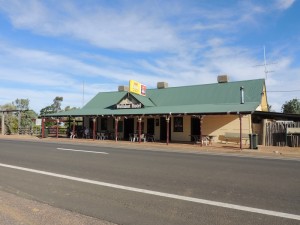 The next day we decided to take a trip out to Lake Dunn.  We had heard that a powered site was only $10 a night but as it was over 120kms from Ilfracombe we took the Suzuki. Passing through Aramac at lunch time we decided to check the Pub out for lunch.  It just so happened that they were having a fund raiser and were offering as much as you could eat roast with desert for $10. Bonus!!  No having to cook tea that night!  It was delicious too!  Lake Dunn is a great spot with near new Showers & toilets.  The only down side is you really need to stay a few days to make the trip out there worthwhile. Gravel to Aramac from Ilfracombe but Bitumen all the way from Barcaldine. 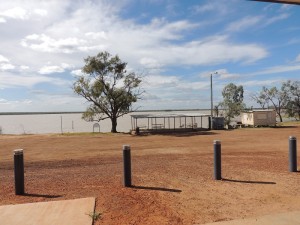 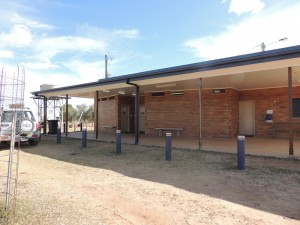 The following day we took a run into Longreach and visited the “Stockmans Hall of Fame”, which is a museum which pays tribute to pioneers of the Australian Outback. The centre is also dedicated to Australian stockmen and Aborigines who have shown bravery and courage. There are five themed galleries, with more than 1200 items on display. 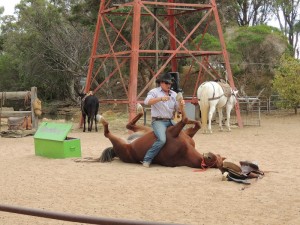 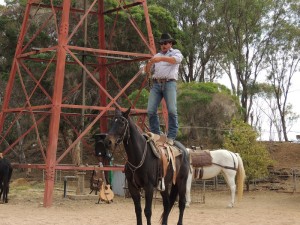 The Outback Stockman’s show is a must see.  The Show tells the story of real life stockmen and women who work on the land. Lachie Cossor, who does the show is based in Yackandandah, is a third generation horse breaker & stockman and it is amazing what he can get a horse to do. 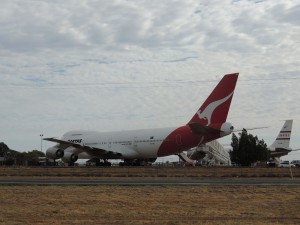 Also housed at Longreach is the Qantas Museum, but we gave that a miss.  Perhaps next time. A dip in the artesian pool at Ilfracombe then back to camp to pack up to proceed on the road again.  As our computer is on the “go slows” so you will have to read what comes next in our next blog!!  Don’t forget to click on “see where we are” on the right tool bar to view the map.