Well continuing on from our last blog, we headed to Winton after leaving Longreach, 177 kilometres northwest.  Winton has a rich history as the birthplace of Waltzing Matilda and QANTAS and links to the Great Shearers’ Strike of 1891, but is just as well known today for something far more ancient…DINOSAURS! The Corfield & Fitzmaurice Heritage Listed
Building is one of Australia’s most perfectly preserved old style general stores. You can purchase a ticket to see the life-size diorama of the 95 million year old Dinosaur
Stampede at Lark Quarry Conservation Park (sorry can’t give our opinion as we opted to spend more time at the Waltzing Matilda Centre instead). 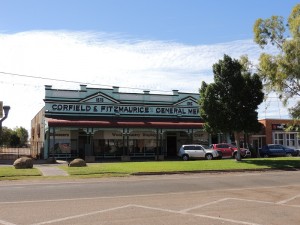 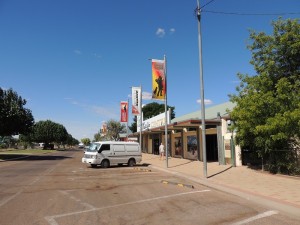 This is a worthwhile visit!  You can sit on a stump by the waters edge, in the ‘Billabong
Theatrette’ where the ghost tells his side of the story of Waltzing Matilda. Interactive displays interpret the song, history and what it is to be Australian. 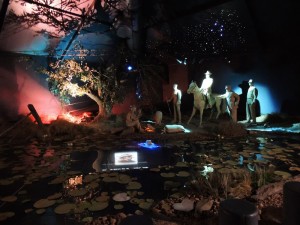 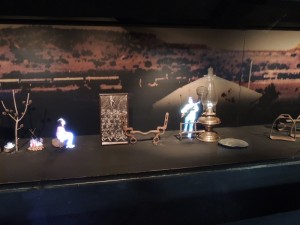 Incorporated in the Centre is also a great Museum & Art Gallery. 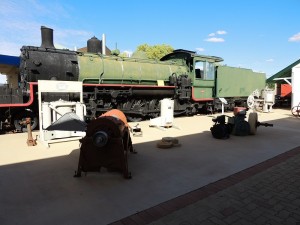 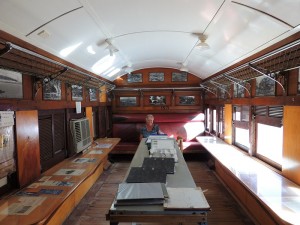 We opted to stay 4kms just outside Winton at the “Long Waterhole”, free camp.  There are no facilities here so you need to be self sufficient but it is peaceful and quiet. The track we took was quite rough but whilst walking the next morning we discovered campsites with easier access. 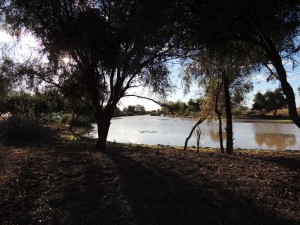 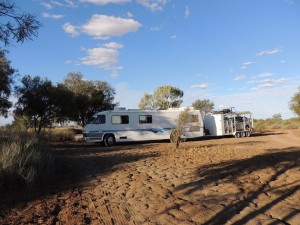 Next morning we visited Arno’s Wall, a modern wonder of art and architecture, Arno Grotjahn’s wall contains almost every household item you can imagine and more. The walls reach two metres high and extend for at least 70 metres. They are constructed of concrete and rock brought from Arno’s opal mine at Opalton and studded with rusted lawnmower parts, boat propellers, vintage typewriters and sewing machines and even a couple of complete motorbikes. 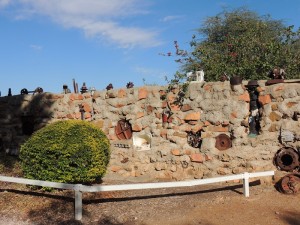 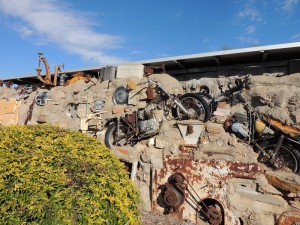 It was then onto the Musical Fence!  The kids would have a ball here! The Musical Fence, designed by percussionist and composer Graeme Leak, is a wire fence that can be played as a musical instrument and it is the first Permanent musical fence installation in the world. There is also a full set of drums made of old cans etc.  We decided to give it a shot but decided not to give up our day jobs! 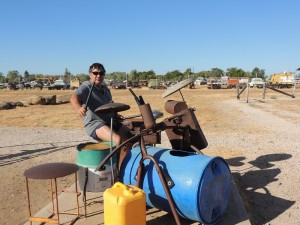 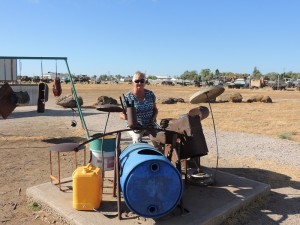 The Musical Fence is situated behind the Diamantina Heritage Truck and Machinery Museum on the road to Hughenden.  Only $5 entry and Tui loved it while Jude chatted and got some good info on other places to visit. 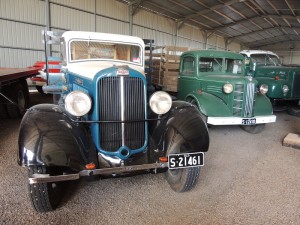 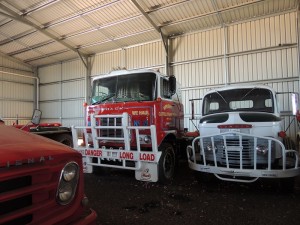 Now although the road from Winton to Hughenden is all Bitumen, it is really rough and man there is a lot of nothing to see!  Unfortunately the Suzi came a little lose and moved forward on the trailer, resulting in the foot pedal of the Bike making a nice little dent in the bumper and number plate!  Bummer!!

We decided to camp at Hughenden in the Showgrounds car park and do some Tiki Touring in the Suzi.  A $6 permit is purchased at the Information Centre. After visiting the “Waltzing Matilda Centre”, we wondered what a real Coolabah tree looked like and just across the road from our camp was a commemorative one that currently undergoing treatment. 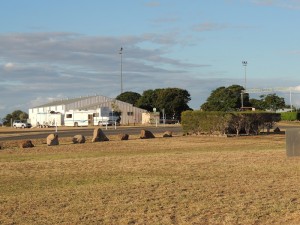 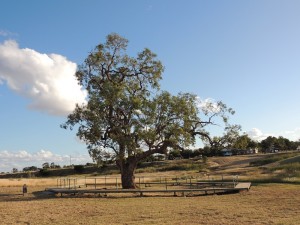 Porcupine Gorge was quite spectacular. The gorge lookout is about 60 kilometres north of Hughenden and The Pyramid campground and gorge walk are another 11 kilometres further north, good road and Bitumen. 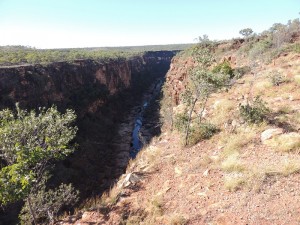 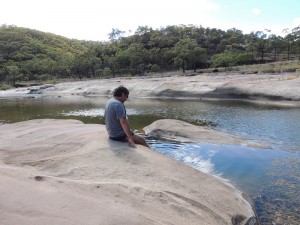 The steep 1.1km walk down into the Gorge didn’t seem too bad but Jude had to have a couple of rests on the way up! Not the best of photos but nearing the top!! 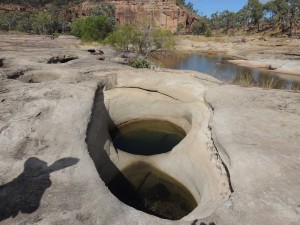 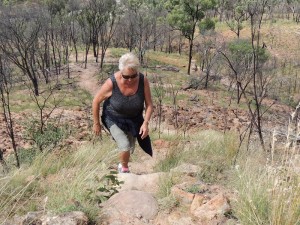 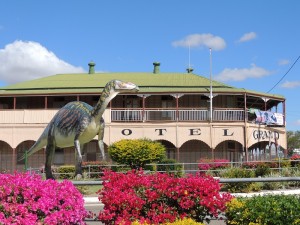 The Flinders Shire is divided by the Flinders Highway – now known as the popular tourist drive ‘Overlander’s Way’. It was also part of a Great Inland Sea and is the centre of Dinosaur Country – home to many fossils including the great Muttaburrasaurus and the Queensland Pterosaur.

On the road from Hughenden to Charters Towers you pass through a little place named Praire.  We have since spoken to people who have said it’s a great place to camp.  Camping is available behind the Pub.  The township has a history as an old Cobb and Co depot and is serviced by a cafe/post office and an authentic Aussie Pub. 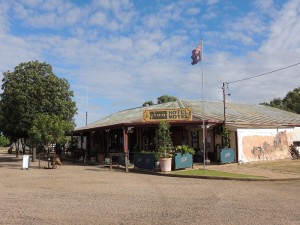 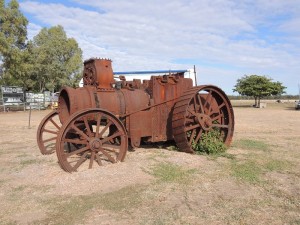 It was then a straight run through to Charters Towers to see our mates Jock & Annie.  18 months between drinks!  Great to see them again.  We spent 4 nights with them then on the last day decided to get fish & chips for lunch and head up to the lookout.  We have been to Charters Towers 3 times but have never been to the lookout.  Great views and we spent some time trying to identify landmarks. 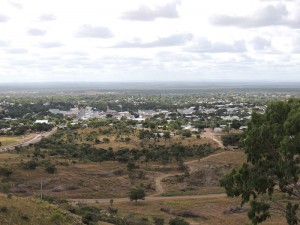 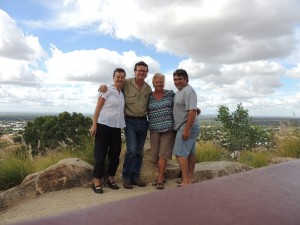 Didn’t leave until late afternoon and by the time we fueled Tiki Tourer, filled with water and dumped our black tank it was getting quite late so stopped at the nearest free camp but more about that in our next Blog.  Until then, “Laugh more, live longer”!!