After leaving our good Mates, Jock & Annie, in Charters Towers we headed for Fletcher Creek Free Camp which was only 42kms North.  Turned the corner and thought WOW Caravan City.  However there was plenty of space once we got in there.  Good spot. 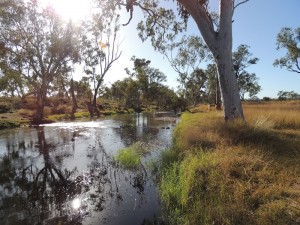 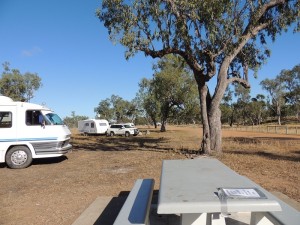 The Gregory Developmental Road has greatly improved since we last traveled it and there are only a few places that are single lane bitumen now.  We missed the turn onto Kennedy Developmental Road so had to do a fairly tight turn a round.  Just drove a little further and had our 1st blowout on the trailer.  “Murphys Law” no where to pull over and Tui shuddered as he watched in the rear mirror the rubber peeling off.  The blowout bent the guard and as Tui was straightening it the bracket broke.  Just as well all necessary tools are on board!! 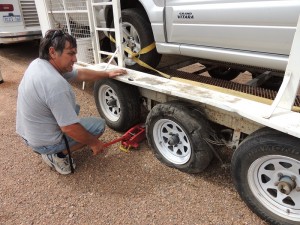 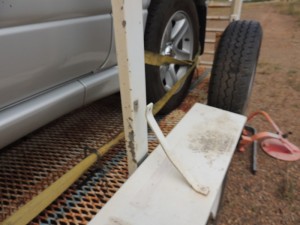 We called in to Innot Hot Springs and were going to camp for the night, however, as there was a free camp 10kms up the road we decided that the $30+ a night would be better spent further up.  Cute place though. 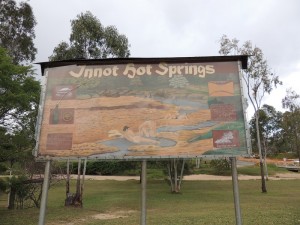 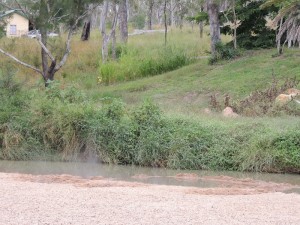 The hot water which bubbled out of Nettle Creek at up to 75 degrees Celsius was bottled and shipped to Europe as a health treatment over 100 years ago.  The Innot Hot Springs Leisure & Health Park has six public pools, or, you can simply dig your own hole in the river sand of the creek bed!

Our camp for the night was Archer River Rest area.  Although fairly close to the road the traffic noise was not a problem.  It is mostly grass surface and plenty of room for Big Rigs. There is a lovely quiet spot with Picnic table by the river.  Sorry no photos! A couple of kms up the road is Millstream Falls, reputedly the widest single-drop waterfall in Australia, a worthwhile visit! 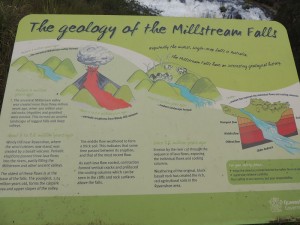 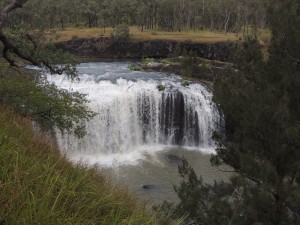 Only another couple of Kms and we were in the quaint little town of Ravenshoe. Everyone was so friendly we spent a few hours here.  We were going to wait until Atherton to get our trailer tyre fixed but were told by the locals that “Tyreright” would give us a better deal. Great company and we ended up purchasing 3 tyres. We can also highly recommend the Bakery, great pies!!  At 930 metres (3,050 ft) above sea level, Ravenshoe is the highest town in Queensland, with Queensland’s highest pub, and highest railway station.  The locals also directed us through a back road so that we missed yet another lot of road works (they are everywhere up here)! 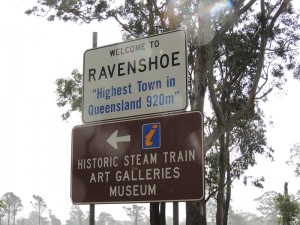 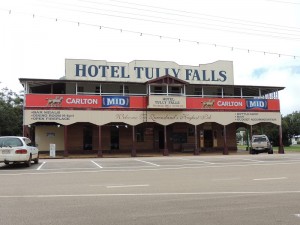 On to Atherton and out to Lake Tinaroo, Yungaburra.  This is our 3rd attempt, during our travels, to get to Lake Tinaroo and we are not disappointed! We are staying at the Lakeside Motel & Caravan Park, recommended by our friends Topsy & Arie, good rates and Amanda is lovely.  This is our base to explore the Tablelands further. 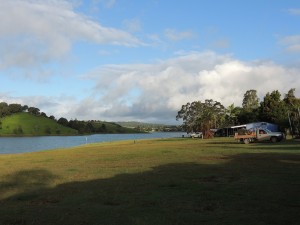 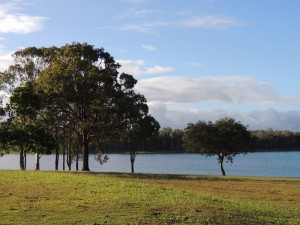 The first day we had low cloud, drizzle and it was quite cool.  Tui dragged out his NZ weather clothes! The decision was made to drive around the lake, the majority of which was gravel (one dirty Suzuki!)  All in all a good day though. 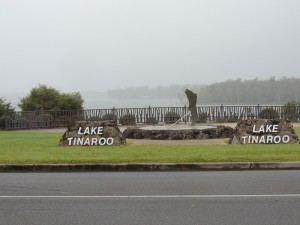 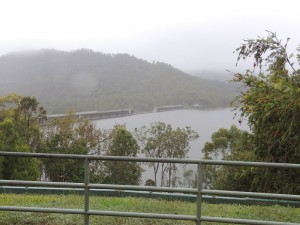 Tinaroo Dam, is a man-made reservoir. It was constructed between 1953 and 1958 on the Barron River close to Lake Barrine and Lake Eacham.  The dam wall is 45.1 metres high and traps enough water to create a lake 3/4 the size of Sydney harbour.  Apparently it was very low until recent rain so we are pleased we didn’t get here a few weeks earlier.

On our drive we passed Lake Euramoo, which is a shallow dumbbell-shaped volcanic crater lake, formed about 10,000 years ago by two massive explosions from groundwater superheating. 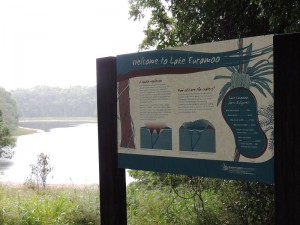 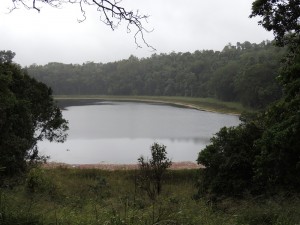 On our last visit to the tablelands we visited the Curtain Fig tree, on this trip it was the Cathedral Fig Tree.  They are amazing trees, a gigantic 500 year old strangler tree and has the reputation of being the best place to hear an early morning bird ‘singing’.  The photos don’t really do it justice. 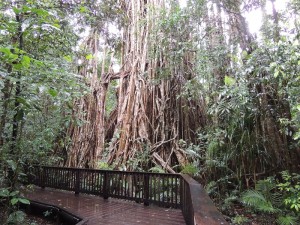 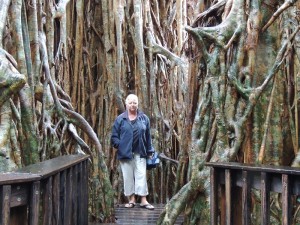 We were told at the information centre that Lake Barrine Tea House makes awesome scones so we called in for Devonshire Teas for a late lunch.  A new batch had just gone in the oven so you couldn’t get much fresher than that and they were yummy!  We still like our Mate, Sydnie’s, cheese scones better!! 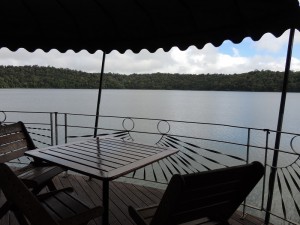 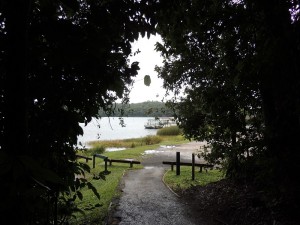 Also at Lake Barrine are the Rain Forest Giants. Twin Rough Barked Kauri Pines. These giant trees are estimated to be about 1,000 years old and are considered one of the earliest known species of rainforest tree.  ‘Kauri Pine’ is the common name derived from the Maori name of the related New Zealand Kauri species 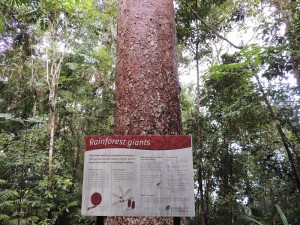 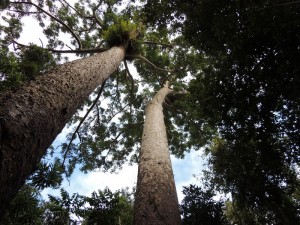 It was time to check out Atherton and also purchase some wine & beer. After a spot of window shopping we stopped at the Chrystal Caves, one of Australia’s most spectacular private mineralogical collection with over 600 specimens such as Crystals, Gemstones and Fossils on display! For over four decades the founder and owner René Boissevain has had a passion to collect these spectacular treasures from all over the world, and bring them together. 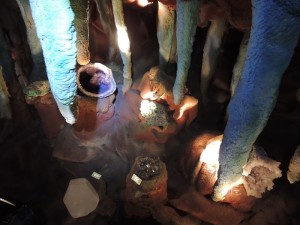 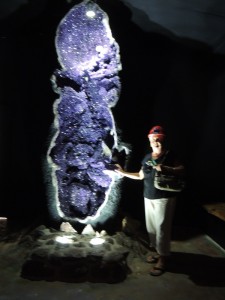 As the publish button was clicked on by mistake perhaps it is time to finish this blog off and update you all further in our next blog (and we thought this one would bring you all up to date!!)