Yep we are still in the Tablelands!  So much to see and do here! Saturday, Lake Tinaroo put on lovely weather for us so the Kayaks finally came off the trailer.  Renate, a friend of our Mates Jock & Annie, lives at Yungaburra, and is a keen Kayaker & rower.  She took us on a guided trip on the Lake and up one of it’s steams. Fabulous few hours. 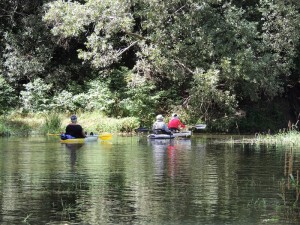 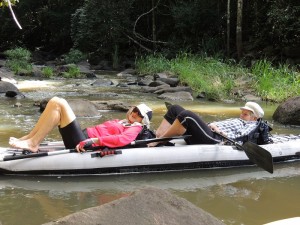 Her friend Emelliah also came along.  These two ladies are no spring chickens but they are a bundle of energy and loads of fun.  Emelliah has a little sporty number and took Jude for a spin!  Next day it was off in the Suzuki to check out the waterfalls in the area.  We didn’t do everyone but first stop was the Malanda Falls. 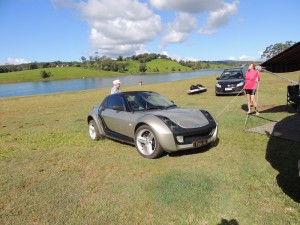 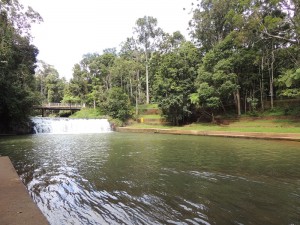 Then onto Millaa Millaa falls.  The falls cascade perfectly to a pristine waterhole below where you can enjoy a refreshing swim in the cool water. It was rather cool the day we were there but there were still mad people having a quick dip!  Millaa Millaa Falls are one of the most photographed in all of Australia. 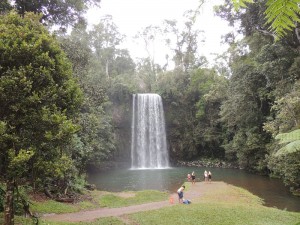 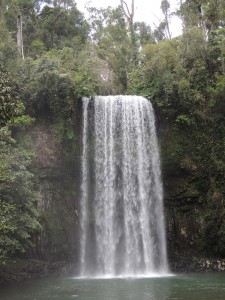 Continuing around the waterfalls Circuit, on the Theresa Creek Road, we stopped at Zillie and Ellinjaa Falls.  This area reminds us a lot of NZ with the lush green grass and roads that actually have corners! 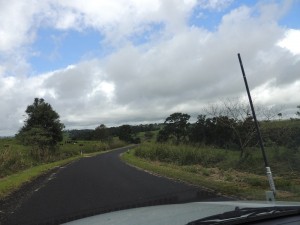 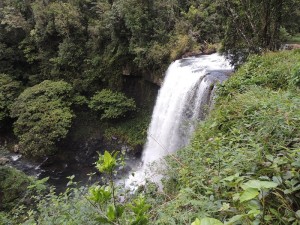 It was then time to stop and have a bite to eat for lunch.  We drove into the little township of Millaa Millaa. The industry is predominantly dairy and beef fattening with tourism steadily increasing. 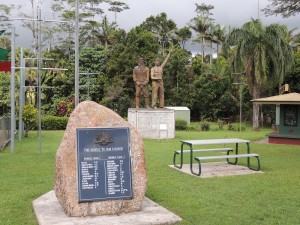 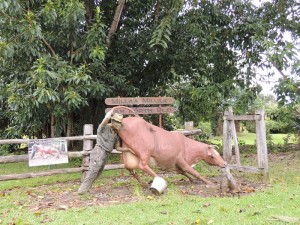 Continuing around our circuit we took in the awesome views of Millaa Millaa from McHugh Lookout. At 1070m it is the most spectacular lookout in the Tablelands.  It was a bit cloudy so we couldn’t pick out all the sights that we had read about. 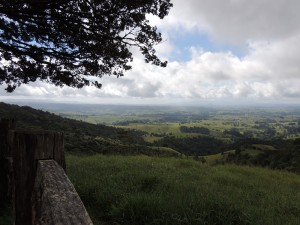 Heading back up to Atherton is the Mount Hypipamee Crater, also known simply as “The Crater”. It is 61 metres in diameter and 82 metres deep.  The name Hypipamee is a corruption of the Aboriginal word, nabbanabbamee, which is connected with a legend of two young men who cut down a sacred candelnut tree, only to be swallowed up by a large hole in the earth, the crater.  Dinner Falls at the head of the upper Barron River gorge is also part of this park. 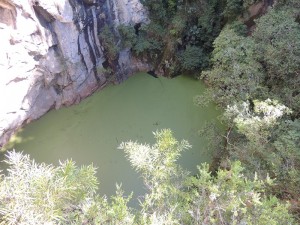 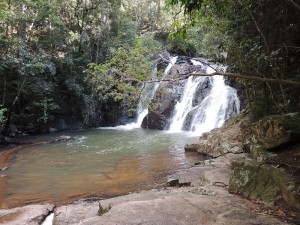 Well that was our waterfall day, a big one!!  Our next Tiki Tour in Suzki we decided to do another loop.  This time we headed north, down the Rex Range to Mosman, along the coast taking in Port Douglas and Palm Cove and back up the Kuranda Range.  Another big day and it was dark by the time we got back.

Although we didn’t do the Mosman Gorge, we went to the information centre and checked it out for another time.  They run a continual mini bus service up the Gorge for $8 per person and you can stay for however long you wish.  A must do another time!  We also checked out the Mosman Caravan Park in case Tui manages to get work in the area.  Their rates have just gone up to $219 a week. More awesome views from Lyons Lookout on the Rex Range.  During the drive along the coast from Mosman to Port Douglas we spotted a Cruise ship.  Now that would be nice!! 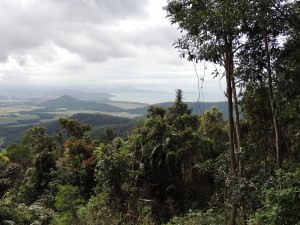 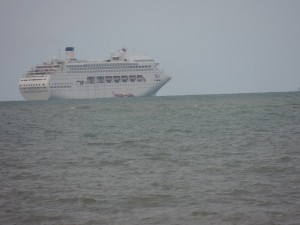 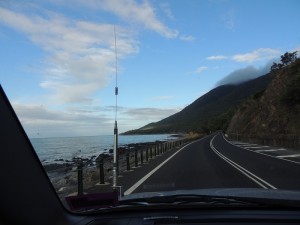 Arriving in Port Douglas around 3pm we were well and truly ready for lunch and Tui spotted a quaint bar where we had a burger & chips!  Yum!  The town’s population can often double with the influx of tourists during the peak tourism season May–September, however it appeared pretty quiet when we were there. 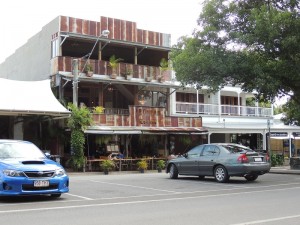 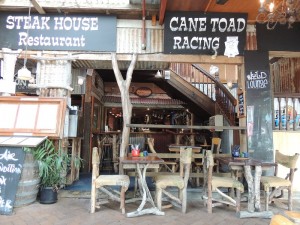 There are numerous Resorts along the Four Mile Beach and we took in the views from the lookout and drove by the Marina. 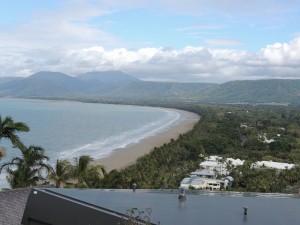 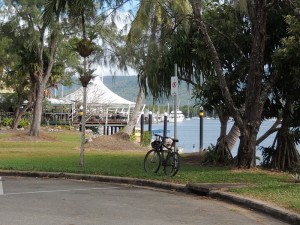 Palm Cove is another place that is popular with tourists due to its proximity to the Great Barrier Reef and the Daintree Rainforest. Palm Cove is the location of many world renowned resorts and hotels and has gained national recognition with recently being named Australia’s Cleanest Beach. 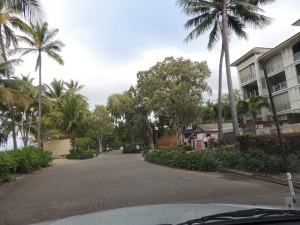 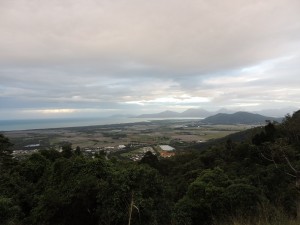 Back up the Kuranda Range.  Missed Kuranda as it was too late but that is another day trip!!  A rest and pack up day followed.  We had initially booked for 1 week at Lake Tinaroo but ended up staying a week and 1/2.  The weather was still windy, drizzly and cool so we decided to move on.  A couple of photos of the bird life there below: 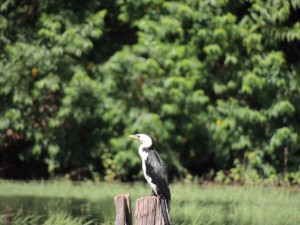 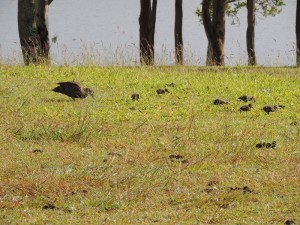 We had intended to drive on up to Lakeland, the beginning of Cape York, however we ended up stopping at the Rest Area 1km north of Mt Molloy, a really nice spot.  Stayed 2 nights.  Met Sue & Boyd who informed us that there was a fund raiser at the Pub for the fireries, $10 a head, so we walked up and had a lovely meal and a great night, with Jude hanging onto Tui’s belt on the way home!  Not too much to drink just dark and he had the torch!! 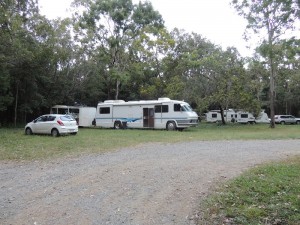 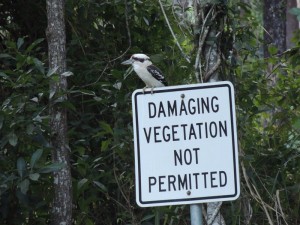 Called into the Information Centre in Mareeba on the way and they have a spectacular museum, donation only. It includes the main Heritage Centre building plus extensive outbuildings and artifacts on a site situated on over an acre. In line with the museum’s collection policy, all artifacts are from the Mareeba district and have direct relevance to local industries and stories.  The majority of exhibits have some interactive components, and many of them can be handled and used, such as in the working Schoolroom, the Telephone party line and the Dairy Shed.

The museum exhibits are displayed as a timeline with key themes covering: Aboriginal History, Early Settlement, Early Explorers, WW1, Health, Education, Transport and local industries including the Tobacco Industry which ceased in 2004.  We spent quite some time there. 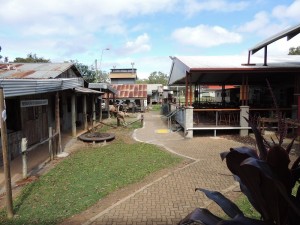 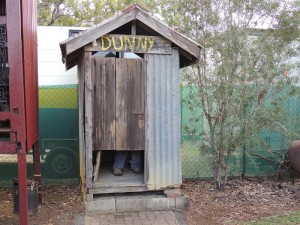 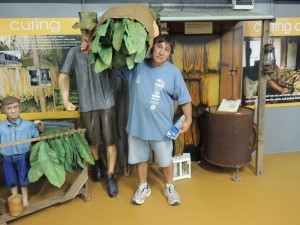 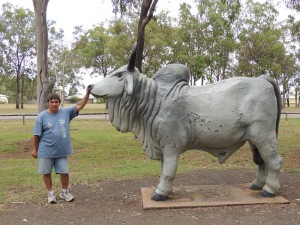 Good timing arriving at the Rodeo Grounds!  During the peak season they do a sausage sizzle every Tuesday night, at $2 a roll.  No cooking again for Jude!!  Well guys that brings us up to date at last.

Watch for more adventures next blog! Until then “Laugh more, live longer!”