Really late doing our Blog this month!  We are still parked at the shed and Tui has been working hard on the trailer.  We are extremely fortunate to have all of the equipment on hand to make the work much easier.  Thanks Brett, really appreciate it! Fellows Bulk Transport now has a full time mechanic, Andrew, his quick whit and humour brings a smile to your face! 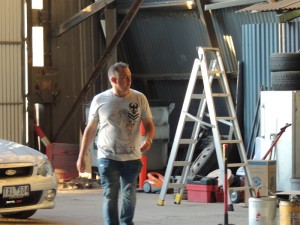 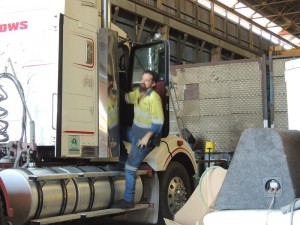 Following on from last month with the progress of the trailer, Tui completely stripped it out with only the chassis left.  Off with Tui’s tool cupboard! Then measure, measure and re-measure! 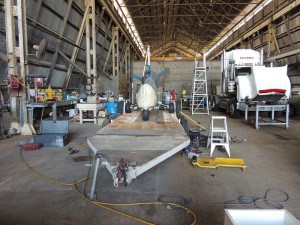 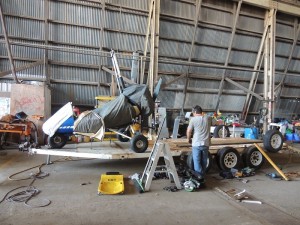 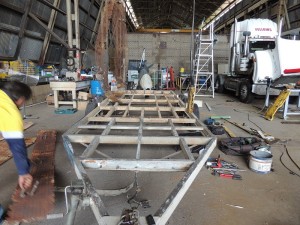 Then came the length & width extensions. 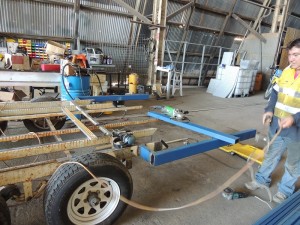 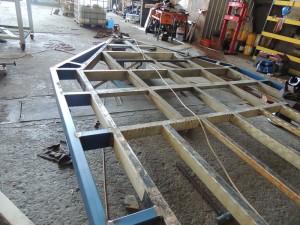 With the assistance of the Gantry we were able to turn the trailer over and paint the underside with ease. First with Iron Oxide to prevent rust and then with a white top coat. 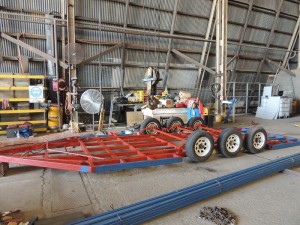 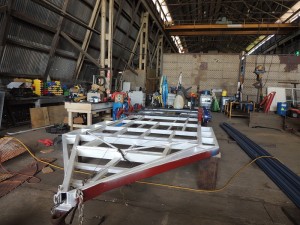 Time to start the framing!  This was going really well until there were problems with a twist in the wall at the front.  A lot of frustration and re-cutting & re-welding done!! 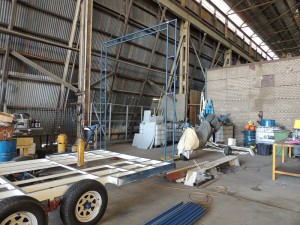 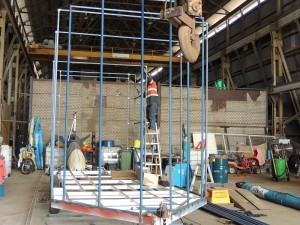 Wow!  It looks massive!!  Tui decided that the original Mud Guards were a bit light so we had some steel cut and bent and he built new ones. 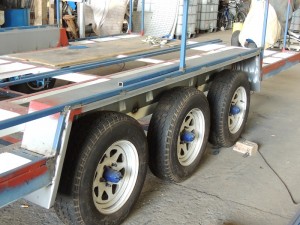 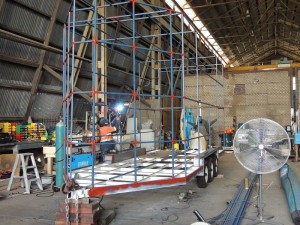 While we were progressing with the trailer, the guys were cleaning up a couple of the trucks ready for them to head south to cart Almonds.  Tam thought it was a good idea to use the Gantry to get to the high parts.  They sure looked great when finished. 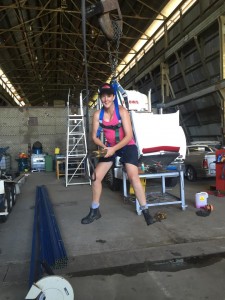 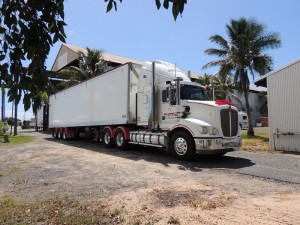 On a Sunday night the Duke of Edinburgh Hotel in Walkerston have a $5.95 Steak, which is served with a baked potato and coleslaw so a group of us went out there a couple of weeks in a row.  Low & behold the 2nd night we won the meat raffle!  That was a first!!  Free meat for a few nights!!  Walkerston is a small town 14kms south west of MacKay on the Peak Downs Highway.

As Pete (the Pom) one of the drivers for Fellows was off to Perth & then NZ for a break we also had dinner at The Shamrock in MacKay.  Beautiful meals and it has been re-vamped since we were here last.

Thanks to their web site for the photo.  Didn’t take the camera!!

Then came Tui’s big 50! Our very good friends Carolyn, Charlie & their dog Joe came down from Mossman in their Motorhome a few days before.  It was fantastic to have them here although not long enough!!  Had a Tiki Tour in the Suzuki around MacKay one day ending up at one of Jude’s favourite place, the Eimeo Tavern for lunch.  Fantastic scenery, great food and awesome company, what more could you want! 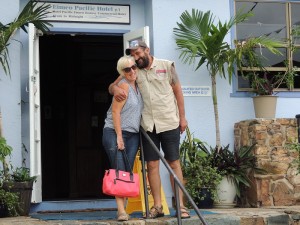 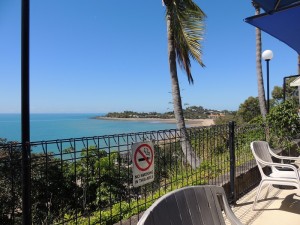 Carolyn & Jude managed to get one girlie day shopping with Carolyn ending up with the bargain of the century, material for new curtains in their Motorhome for only $24!!!

A few of the Fellows workers came around to the shed the night of Tui’s 50th, so Jude cooked roast Beef, pork and lamb in the Pizza oven served with fresh rolls and salad bits.  Of course there was also the Chocolate Mud Cake and as it was Andrew’s birthday the following Monday Jude made him a Banana Cake. 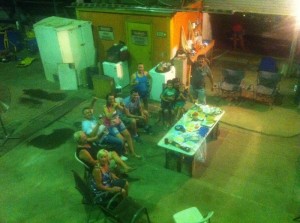 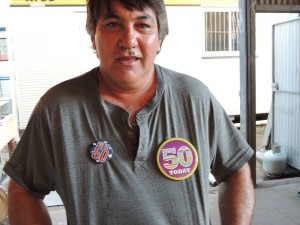 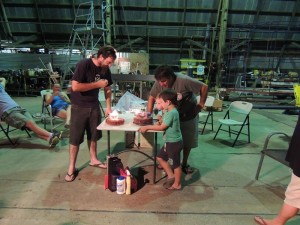 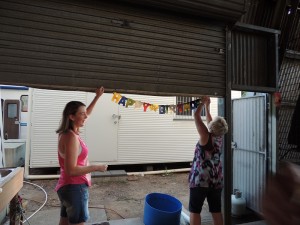 Unfortunately the photography wasn’t the best!!

It has also been a stressful, upsetting and expensive month.  Apart from the trailer, our “Best tenants in the world” have bought their own home.  Really excited and pleased for them but we will really miss you Justine & Tony!!  The Hot water cylinder in our house decided to pack it in, a new one was the only solution!  We have had hassles with a job we did, as a favour, 4 years ago in Bindi Bindi, 2 hours north of Perth, which we won’t bore you with.

Tiki Tourer is starting to show her age (1986 model) and after 4 years of travel we have had a couple of things break down.  Purchased a new toilet as the old one was leaking and Tui was unable to fix it, then both the air con units have decided they don’t want to go anymore.  Once again thanks to Brett who has lent us a portable one to tide us over. Two sad loses in our extended family!  Our heartfelt sympathy Amie “Never rains but it pours” so they say!  Can only get better!

Tui has had to go up to Bowen to drive for Fellows for a week or so, Jude is holding the fort at the shed.  Mind you we really can do with the cash injection right now! This means the trailer has come to a stand still for a bit!

Well that’s about it for this month!  Until next time!