Well we missed doing an August Blog! It is getting quite difficult to be creative on what to write about when we have been here for over 6 months! Wow! Half a year gone!!

We have settled in to a routine at the house. Jude has been cooking tea 5 nights a week with the house mates contributing to the cost of food. The hardest part is thinking of something different to cook each day! Even though the weather has warmed up we still have our fire pit for ambiance. It must look strange, people sitting around a fire in shorts and singlet tops!! 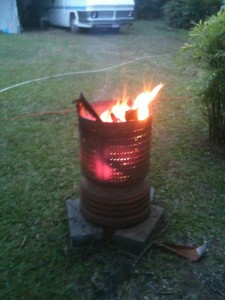 The Sugar Mills continue to be a start/stop affair so some of the boys, including Tui, have been carting wood chips from a little place called Dingo, approx 350kms southwest of Mackay. Only one trip a shift can be achieved with Tui being on a 3.30am start.  Quite tiring for both of us.

Dingo is a small town located just across the railway line from the Capricorn Highway. The origin of the town’s name is shrouded in mystery – some say a railway surveyor saw a dingo on the creek bank and gave the town its name whilst others say that Moses Wafer, an early pioneer, heard dingo’s howling at night and named the town after his camp site. A bronze statue of a Dingo is in the town commemorating the town’s name. 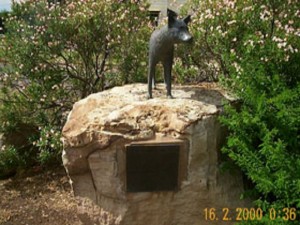 Thanks to capricornholidays.com.au for the photo

This busy town sits on two major highways that service the beef, mining and coal industries. Up to 1,000 vehicles pass through in one day. The Township consists of a School Complex (The Dingo School was first opened way back in 1877), 2 x Saw Mills, a Post Office & General Store, QCWA Building, a Hotel/Motel, Caravan Park, Community Hall, Tennis Courts, Roadhouse, Church, Race Course (Bauman Park), a Pony Club and a Rodeo Club. 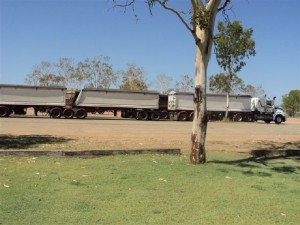 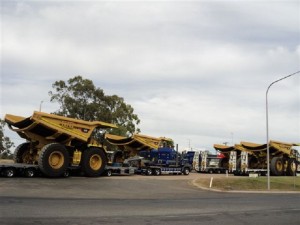 Thanks to the Dingo Roadhouse for the above 2 photos.
The house where we are camped behind is close by the Mackay Goose Ponds, which is a network of freshwater catchments, home to turtles as well as many different types of birds and fish. Lots of geese, ducks, and even the odd pelican on the banks and in the water, and if you stay still at the edge of the water or on the bridges for long enough, you will see curious turtles stick their heads out of the water, almost as if to say hello. Other than animals, the Goose Ponds have a range of big, shady trees, lush green grass and small hills and slopes that lead visitors over and under different bridges. The walkway is really well laid out and is an initiative of the Mackay Regional Council’s 10,000 steps program. You will recall when we were here in 2013 we wrote about the other walkways around Mackay. There are also a number of exercise stations along the walk giving fitness fanatics a varied workout. 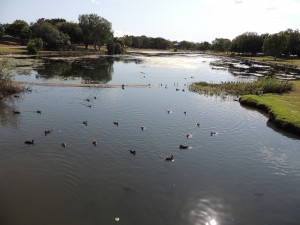 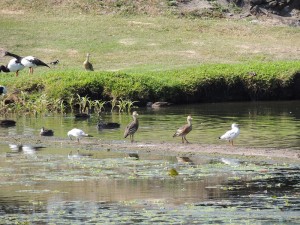 Jude had a birthday in August!  Not counting them anymore!!!  A really nice day!  Parcels from NZ arrived the day before, exciting!!  Beautiful jacket from Tui, with the help of Tam & Sydnie!!  It was off to Muffin Break for Jude & Sydnie for Coffee & a muffin for brunch, a spot of shopping, relaxing afternoon, then about 12 of us headed to the Mt Pleasant tavern for tea.  Fantastic night, food was great, lots of laughs and Jude was very spoilt! In case you were wondering the 64 on the table was just our table number, no reflection on age!!! 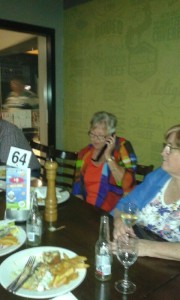 Gavin & Vanessa paid us a visit in their 5th Wheeler on their way to their newly purchased block, just outside Maryborough Qld, 1st time in a house after being on the road for 8 years!  All the best guys! They ended up staying 3 nights.  One of those nights just happened to be Bledisloe Cup night where the All Blacks smashed the Wallabies!  Gavin is also a Kiwi so you can imagine the noise when a Try was scored!  Great night!! 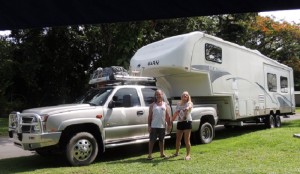 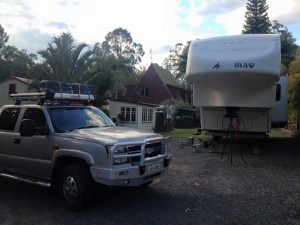 We also had our mates Sandra & Nev visit us on their was south from Mareeba.  They never camped at the house as with a low Caravan, Nev thought he might bend something getting in the driveway.  They camped 2 nights just down the road at a Caravan Park, joining us for a Sunday Roast at the house, then Sandra, Nev joined us for a late lunch At “Sails” at the Marina. Jude also took Sandra & Nev for a drive along the newly reopened Breakwater.  The popular wall was regularly used by anglers, runners, walkers and sightseers alike until it was closed due to cyclone damage in November 2013. 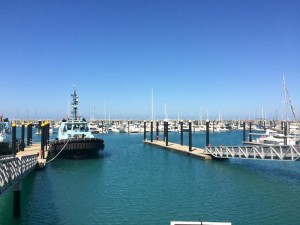 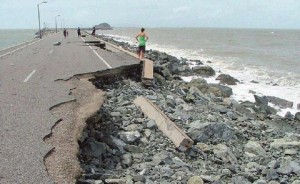 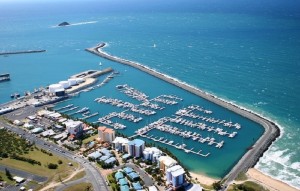 Thanks to the Daily Mercury & Sea-seek for photos.

We have also had a new addition to the family! Jeff & Amie have had a gorgeous little girl! Well not so little as she weighed 8lb 8ozs and was born on the 29th August. 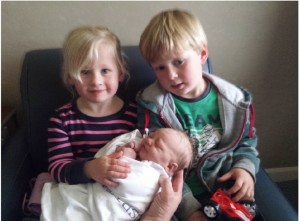 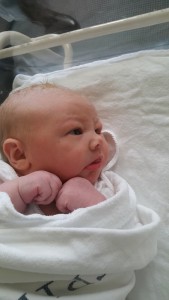 Well that is about it for now! Until next time “Laugh more, live longer”.