Wow! The month is nearly over and we are over half way through the year already! 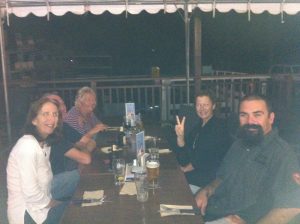 Two important people we missed off the last Blog were Paul & Brooke.  We met them when we were in Mossman, they now have a block of land and are building a house, not far from Maclean, out towards Iluka. They came to visit us when we were camped on Woodford Island and we met up with Jeff & Deb for Diner at the MacLean Tavern. Great to catch up Guys!

As we said in the last blog, next stop Grafton.  Unfortunately the Bank Balance was looking rather low, and Jeff suggested Tui try for a job at Jim Pearson Transport, which is a highly renowned transport company throughout the east coast of Australia. They have a base in Grafton and move large quantities of freight between Brisbane and Sydney. Our plan was to head to Port Hedland in WA as there was the chance of a good paying job, however that was an on again off again affair.

We left Tiki Tourer and the trailer at a Truck Stop 2kms from town and took the Suzuki in the see where the best place would be to base ourselves.  Of course the first stop was to check out the local Aero Club!!  It appears that Tui will be able to leave his Microlight in a hanger there. 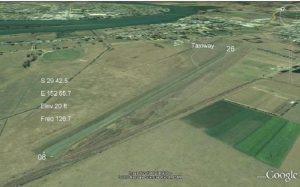 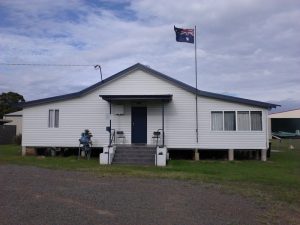 Thanks to their Web Site for the photos!

The club has existed in some form since 1930 with a short break during WWII. Apparently they have a get together every Friday evening at the clubhouse where visitors and guests are welcome along with club members. Annually in August they host a “Wings and Wheels” open day where a variety of vintage, classic, sports and touring motor vehicles and aircraft and their owners get to mix and mingle and display their pride and joy. They also host a “Jacaranda Muster” in conjunction with the world famous Grafton “Jacaranda Festival”. The highlight of this event are the complimentary flights provided for the Jacaranda Queen and participants over the city to view the Jacaranda trees in full bloom. This event is held in late October.

With that out of the way it was a stop at Bunnings, BCF etc. etc.  Looked at a Caravan Park on the Gwydir Highway, but it was too small to get our big rig into. 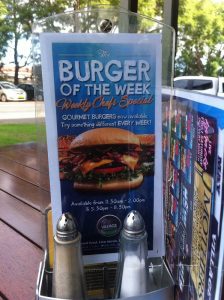 Had lunch with Jeff & Deb. Next stop Glenwood Tourist Park in South Grafton.  Just down the road from Jim Pearson Transport and not far from the Aero Club. Low & behold the Managers come from Tui’s home town, Taumarunui so we hit it off right away.  Back to get Tiki Tourer & Trailer.  We told Susan & Alan (the managers) that our Rig was big but I think they got a bit of a surprise when they saw how big!  We have a lovely big site and I have only a couple of steps to my Pizza Oven. 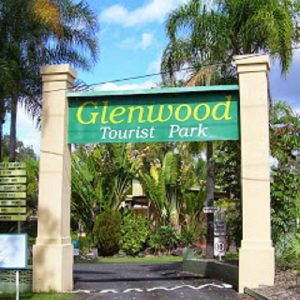 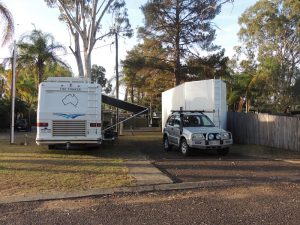 The first Saturday we went to Paul & Brookes for tea.  They are currently renting a place with a magnificent view of the ocean in Tamba.  We decided to take a change of clothes and stay the night so we could have a few beavies!  Great night guys, thanks. 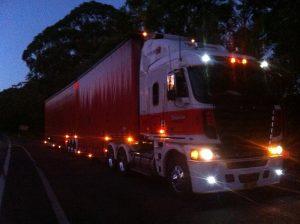 Tui set off for Jim Pearsons Transport.  First off was a driving test to make sure he could actually drive.  They are big B Doubles and not that easy to back but he soon got the hang of it.

Next in the process was a trip to Coffs Harbour for a fitness test. With just over an hours drive Jude went along too.  Tui’s appointment wasn’t until mid afternoon so we drove out to Wooli on the way to have a look.  A bit off the main road but only a 36min drive from where we are camped.  This secluded beach is surrounded by Yuraygir National Park and offers a story book setting for rest and relaxation. 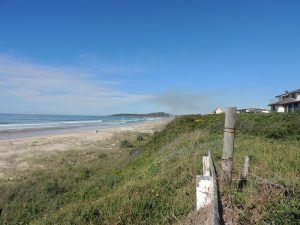 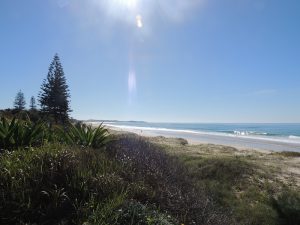 It forms the northern sector of the Solitary Islands Marine Park which protects the estuaries, beaches and islands from the Sandon River to Coffs Harbour in the south. The Wooli  River can be negotiated for around 20 kilometres by canoe or boat. Kangaroos, emus, black-necked storks, brolgas, kingfishers, parrots and all manner of wildlife abound along the banks. It is a favourite for fishing  & picnics with good spots  from the beaches, rocks (the breakwalls are popular) or deep sea where local fishing charters are available into the marine park. 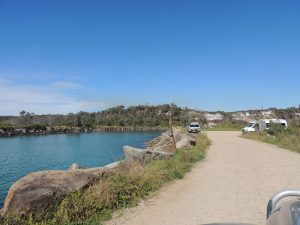 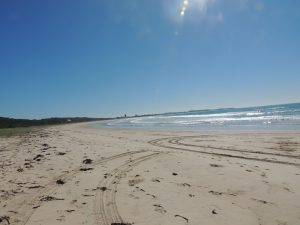 Back to the main road and onto Coffs Harbour.  Coffs Harbour was the hub for a thriving banana industry. One of the biggest attractions is the Big Banana, one of the first of Australia’s Big Things (it celebrated its 40th birthday in 2005), the World’s Largest Banana celebrating the region’s best known export which has now been superseded by blueberries as well as tourism and fishing. 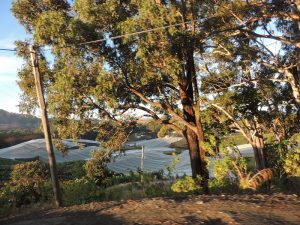 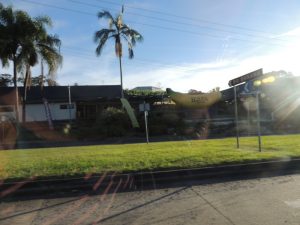 There is a massive amount of road works on the Pacific Highway and eventually it will be a 4 lane highway all the way from Brisbane to Sydney. 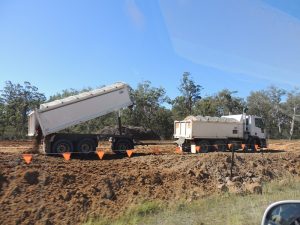 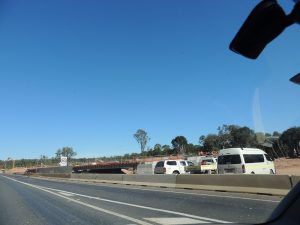 A stop off at a cafe for Tui’s Eggs Benedict for lunch which wasn’t the nicest.  Jude’s eggs had runny whites after specifically requesting they were well cooked.  There is was a mad dash to find Tui some new boots before his appointment. 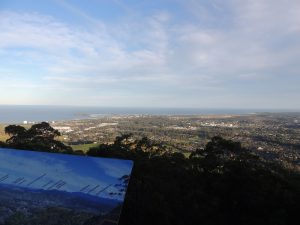 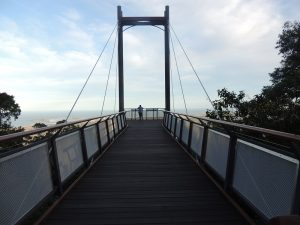 On the was back we went up to the Sealy Lookout.  The Lookout and the Forest Sky Pier sits within a flora reserve in Orara East State Forest – part of the amazing state Forests of the Coffs Coast. It is only a 10 minute drive from Coffs Harbour up through banana plantations – it’s open to vehicles during daylight hours, and is free. The Forest Sky Pier offers magnificent coastal views over the city of Coffs Harbour and up and down the coastline. There are walking tracks through rainforest, ranging from one to three hours, and picnic tables and toilets are provided. Coach parking is available. 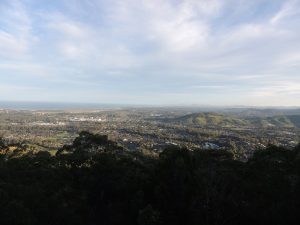 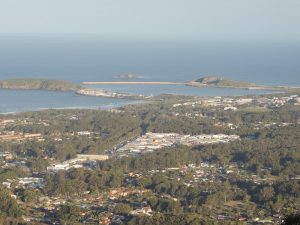 With that completed, Tui had to travel to Port Macquarie for a 3 1/2 day induction.  They put him up in a Motel, Jude stayed with Tiki Tourer.  The very first day on his way to the induction a guy in a 4 x 4 Ute smashed into the back of him.  Poor Suzuki looked really sad, with the back door smashed in, window shattered and the spare wheel stoved in.  Not a great start! Tui had to tape up the window to get by until he returned to Grafton and sort out a Panel Beater. 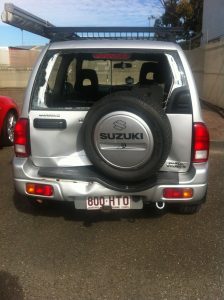 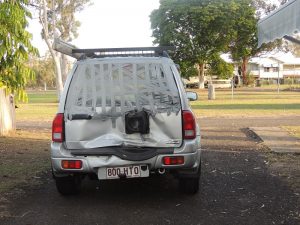 Just over a month later we got Suzuki back!

It was a full on course and by the end Tui’s brain was scrambled!  He is now working full time and has some really strange hours.  Sometimes starting as early as 1.30am, 5.30am or even has had a couple of 9am starts.  It is not unusual for him to be away 14, 15 or 16hrs, depending on wait times for loading and unloading.  Jim Pearson Transport specializes in the transportation of FMCG (Fast Moving Consumer Goods) and large volume goods including packaging supplies and other raw materials to leading retailers throughout Queensland and New South Wales. Tui mainly drives from Grafton to Brisbane and goes to a wide range of places, Woolworths, Coles etc.  Quite a challenge when you don’t know Brisbane well.  He can tell a few stories!!  Passenger terminal the other day! He said on facebook he just might stow away!  LOL! 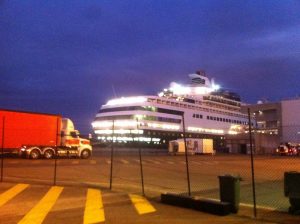 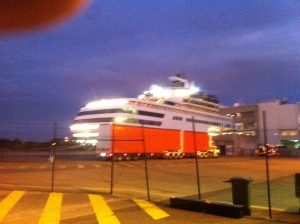 Jude has made a couple of really good friends, Tricia & Lynne. As Tui takes the car to work everyday whenever someone is going to town Jude gets a lift.  Pretty lucky!  The girls go shopping at least once a week and of course a compulsory coffee at Coffee Club!  Tricia was setting off to Evans Head, about 1 1/4 hours from here, and 11 kilometres east off the Pacific Highway from Woodburn,  to meet up with a couple of friends for lunch so asked Jude to go. 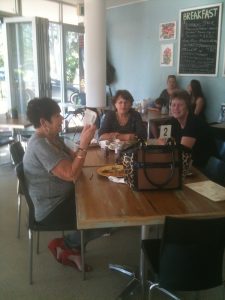 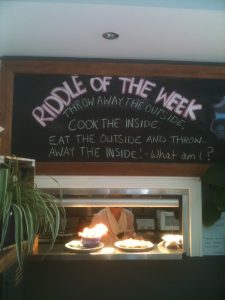 The Evans Head Holiday Park (formerly known as ‘Silver Sands Caravan Park’ ) has almost 600 sites and is located within walking distance of all the local town amenities. The town has two supermarkets, two butchers, a number of clothing stores, and other eateries who cater for the tourist population. Whilst the population is less than 3,000 people that number swells in holiday periods.

The girls all started walking everyday and Jude was enjoying the exercise.  Firstly Tricia had a medical issue and couldn’t walk then a few days later Jude was changing the sheets on the bed and slipped, putting a big gash in her shin, from the wooden base of the bed.  Thank heavens for great people in the park!  Tui was at work so Lynne’s husband Bill took her to Grafton Hospital to get it stitched.  Back to the hospital today after over a week and  it is now infected!  Fingers crossed it will come right!! 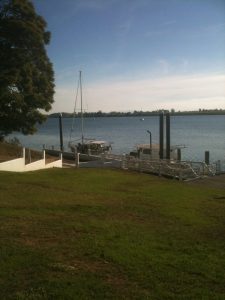 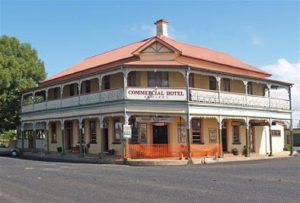 The girls also travel to Ulmara on a regular basis only 15mins away.  Firstly Tricia has found her favourite Book Shop and secondly they have awesome coffee in a quaint Cafe attached to the Tavern.  It is a small town on the south bank of the Clarence River, population of approx 446 people .  Some beautiful old homes. 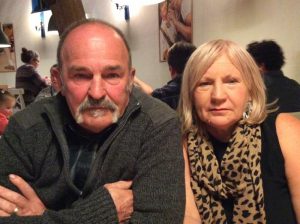 Lynne & Bill often have a fire at Happy Hour so a couple of times a week Jude goes and has a drink with the girls.  When Tui is home he comes too. Not late nights, usually back at Tiki Tourer by 6pm at the latest.

Last Wednesday 8 of us (including the Managers) went out to the South Grafton Club for tea.  Great company!  My Salmon was beautiful but I think Tui’s steak was a bit average.  Good prices though!

It is a bit of a worry with the downturn in WA with 2 of our properties now vacant!  Anyone know of someone wanting to rent please let us know!!  We are both feeling the cold having been in Queensland so long.  Had to drag out the NZ winter woollies!!!

Well don’t know how long we will be here so will just have to keep you posted!