Yes we have left Perth!  The last week was pretty hectic.  The day before we went to Bindi Bindi, Tui got a phone call with the offer of a job in Kalgoorlie, thanks to our mate George.  A trip to Perth to have his medical and fitness test.  A very lengthy and tiring process.  Also had to apply for a Police Clearance.  Arrived at Pete’s and just parked up in the Driveway to the shed.  Great to be back there and reminisce. 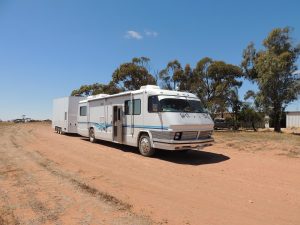 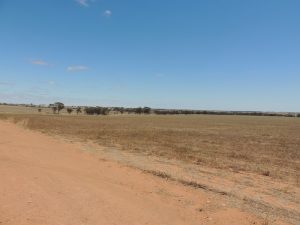 Quite a bit drier that an hour down the road at Kim’s place. Went to Ellenbrook for lunch on the Sunday for Pete’s Dad’s 82nd Birthday. Wow, has that place grown.  Lovely meal, a fun day. 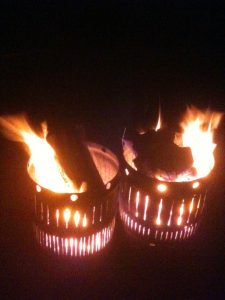 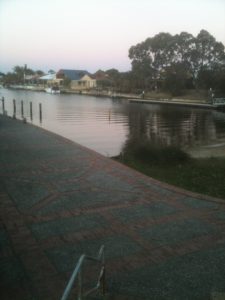 Always a great time with that group. The girls took a trip into Pinjara on Saturday and all had a pedicure and did a spot of shopping while the boys collected firewood.

Called into Tom & Gayle’s in Mandurah so Tui could have a look at Tom’s garage door which on inspection needed a new motor.  Tom & Tui did a few other chores so we ended up staying the night with Gayle & Tom shouting us tea. Thanks Guys it was awesome.

On the road bright and early next morning so we could call into Russell & Julie’s and check out their Garage Door.  Lovely Breakfast thank you Julie.  This time it only took Tui a few minutes to fix so we were soon on our way to Kalgoolie. 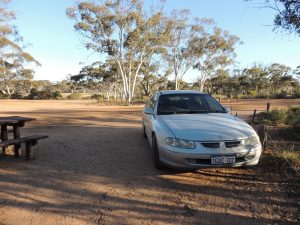 Tui had bought a 2000 Holden Calais from Paul as a hack for him to drive to & from work so after getting a few repairs done & getting it registered, Jude drove behind Tiki Tourer and the trailer to Kalgoorlie, some 657kms. Car went well but looking at the rear end of the trailer became a bit monotonous. We decided to have a break at Karalee Rocks, a free camp, 51kms East of Southern Cross & 177kms from Kalgoorlie. A 3-night maximum stay applies and you need to come equipped with firewood and drinking water but there are toilets and a Dump Point. 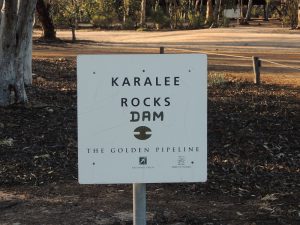 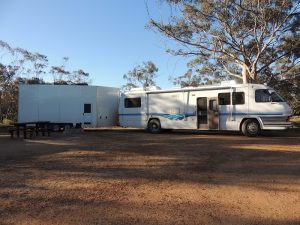 The dam was built at Karalee in 1897 to provide water for steam trains using the Southern Cross to Coolgardie railway.   While we were there they were pumping water from the Dam to fill a Water Truck for the road works. 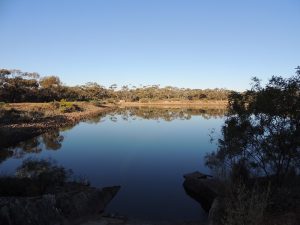 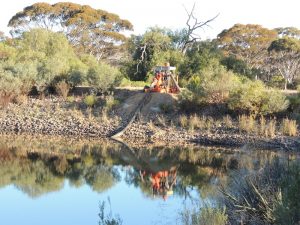 The site was chosen mainly because of the granite outcrop; with rain the outcrop becomes a natural catchment area.  This enables the water to flow off the rock into the dam via a large semi-circular aqueduct of steel, hand riveted at each joint, which is still in very good condition considering its age and the natural harsh elements. To reflect upon the unbelievable manual labour and horsepower involved in this construction, is well worth the journey. An informative trail leads beside the old aqueduct, however we didn’t wander too far as the flies were real bad. 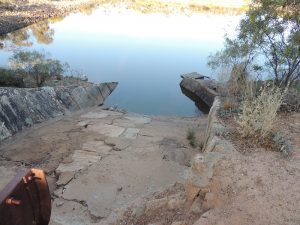 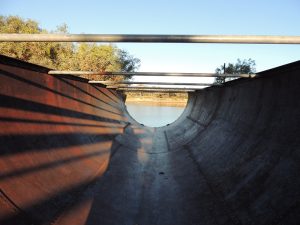 A bit of a slow start next morning, then off to Kalgoorlie. After filling with water and a spot of grocery shopping we headed to George & Vicky’s.  Camped out the front of their place. We had intended to go to a caravan park but George insisted he could get us into the back in the weekend so with a rearrangement of vehicles and the grand kids play area we were in. Thanks guys. 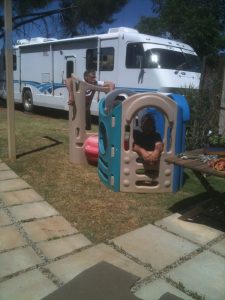 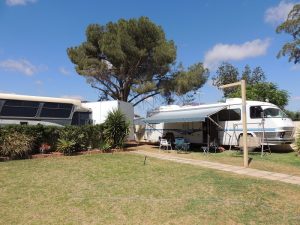 Finally the Police Clearance arrived so Tui was off to do his inductions.  He is working for Ausdrill and is servicing the Drilling Rigs in the Super Pit.  Ausdrill is integrated mining and energy services group providing exploration, mine develoment, surface and underground mining, manufacturing, energy and infrastructure services globally. 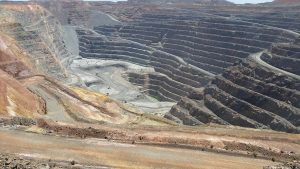 Kalgoorlie Consolidated Gold Mines (KCGM) is the management company of the Kalgoorlie Operations for Joint Venture Owners Barrick Australia Pacific Pty Ltd and Newmont Asia Pacific Ltd. KCGM Operations include the Fimiston Open Pit (Super Pit), Mt Charlotte Underground Mine and the Fimiston and Gidji Processing Plants. The risk of working near voids has prompted KCGM, with partner contractor Ausdrill, to develop the long-reach drill and a remote drill to better and more safely navigate voids. The Super Pit is purported to be the largest open pit Gold Mine in Australia.

According to Wikipedia the pit is oblong in shape and is approximately 3.5 kilometres long, 1.5 kilometres wide and 600 metres deep. However we have heard it is now larger than that. A big hole!! Mining is via conventional drill and blast mining via face shovels and dump trucks. Around 15 million tonnes of rock is moved in any given year, consisting primarily of waste rock.

In order to recover the gold, the ore must be crushed, passed through a gravity circuit to recover the free gold present in some of the higher-grade lodes, and then subjected to flotation to produce an auriferous pyrite concentrate. This is then roasted at a small smelter outside Kalgoorlie-Boulder to liberate the gold from the tellurides.

He is now doing 11 days straight then goes onto a regular roster of 7 days on, 4 days off, 7 nights on, 3 days off.  It is good knowing when he is working so that we can plan to do things on his days off. Think we will be here a while.

A lovely surprise when our Mates Jen & Mick, who we met in MacKay, rocked up.  Once again George said we will get the Caravan in!  A bit of a squeeze but they made it. 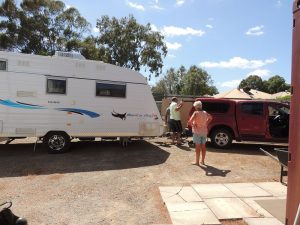 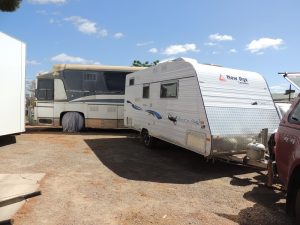 Tui had the weekend off so we took them up to the Super Pit and he explained a lot of things.  Of course the usual photos were taken. 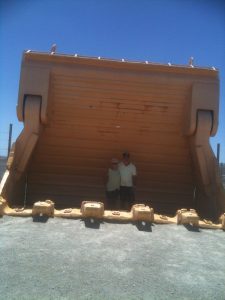 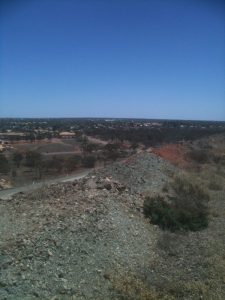 Called in to the Go Kart track where George and Vicky were doing a sausage sizzle.  Great track and it was interesting watching some of the Drivers doing their stuff.

Sunday the 6 of us headed to Broad Arrow Tavern for lunch, a ghost town, located 38 km north of Kalgoorlie on the Leonora Road.  Gold was first discovered there in 1893 which triggered a gold rush in the region. At its peak the town had 15,000 residents, eight hotels and two breweries as well as a stock exchange. Other facilities included a hospital, three churches, Salvation Army Hall, a chemist, two banks, police station with resident magistrate, a mining registrar, a post office, a cordial factory, six grocery stores and two draperies, and blacksmith and bakers’ shops. 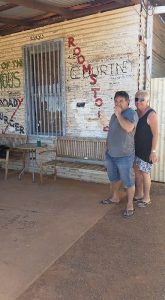 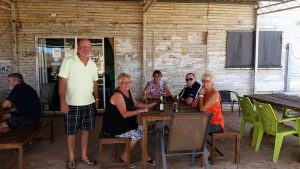 The tavern has made a feature of graffiti and the walls are covered with the scribblings of many visitors. Unfortunately we left the Pen behind.  Might have to revisit one day.  The beer is icy cold and the burgers are great, huge in fact. It is very quiet during the week but on weekends it comes to life. 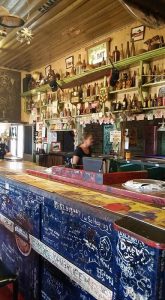 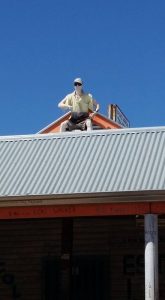 Well this has been a bit of a rushed Blog as Jude is off to New Zealand tomorrow for three weeks.  Catch ya next month.

Until then “Laugh more, live longer”