Well we have now been in MacKay for 3 months!  That is a record for us staying in one place and it looks as though we will be here a while yet.  Tui is really enjoying his Truck Driving and has been carting wood chips from the Bush just out of Proserpine to the Mill. That is approximately 130kms one way.  By the time he loads, it is a 3hr round trip.  At last he has been able to get above 4th gear. 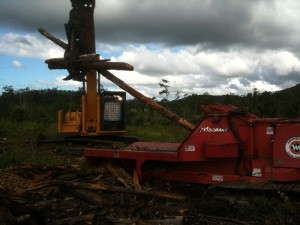 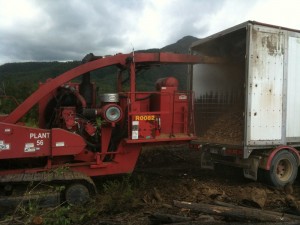 The wood chips are from the forest where trees have been blown over in storms.  The chips are shipped to the sugar mill and burnt with the Bagasse (as described in the last blog) to produce electricity.

With this trip he has been working day shift.  Leaving Tiki Tourer anywhere from 4.45am to 6am, returning anywhere from 4pm to 6.30pm.  We are still getting quite a bit of rain and everyone keeps telling us it is usually beautiful weather at this time of the year. Unfortunately there have been a couple of stuck trucks. 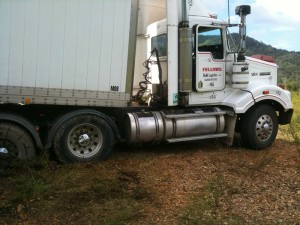 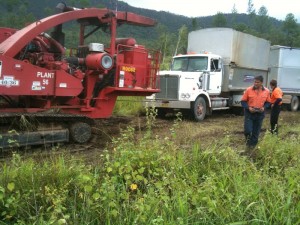 Tui has never been one to worry about snakes but one day the excavator picked one up with the logs and then the snake stories began. Tui wasn’t taking any chances when with a stick he laid it out for a photo. 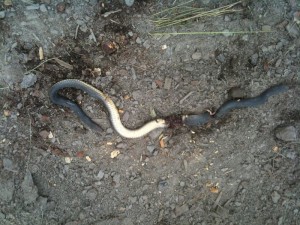 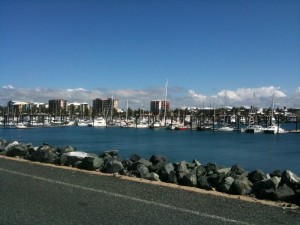 One Sunday when Tui had a day off we went to the Marina for a late breakfast.  The Marina has 479 berths designed for vessels with a 3.5 metre draft. There is a residential village of luxury apartments, townhouses, state-of-the-art boat maintenance and repair facility and commercial precinct of restaurants and shops. On a Sunday they have live music outside the Sails Sports Bay so we sat had a couple of ales and listened to some good old fashioned Blues.  A great way to spend a Sunday!!

The wood chips have now finished and Tui is getting a couple of days off then its back to carting Bagasse from one Mill to another.

Our neighbours, Jase & Carol, headed off to NZ for a holiday and Jase asked Jude if she would mind opening up their Bus to air it out while they were away.  Also Jase had done our lawn for us while Tui was working so it was time to pay them back.  Tui really would love to buy a new Susuki as ours is getting pretty worn out so when he moved their Suzuki to mow the lawns he swapped Susuki’s and took photos. 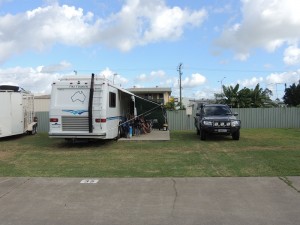 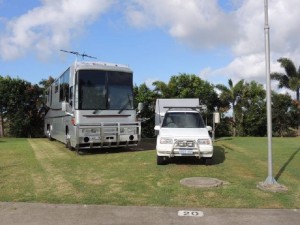 We still have times of hilarity in “The Park”. One of the regular “Happy Hour” attendees, Glen, has now moved back to Victoria.  All the best Glen, we will miss you! 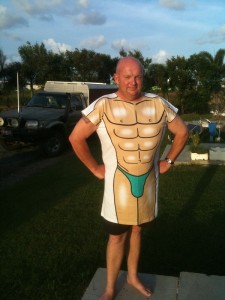 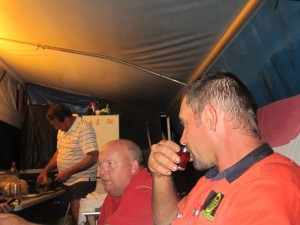 A big night was had by all on the 11th May.  Pasta night with 21 attendees.  Two Gazebos were set up in case of rain. The other one was set up after the photo below.  As most of you know Tui isn’t a tie person so we bought him an appropriate T shirt and hat to act the part.  Very sexy!! 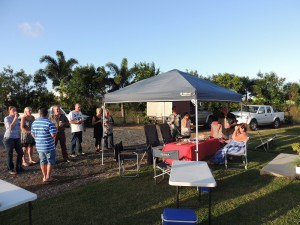 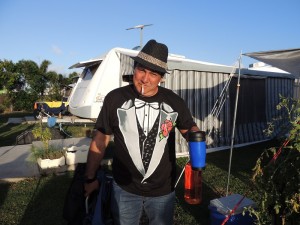 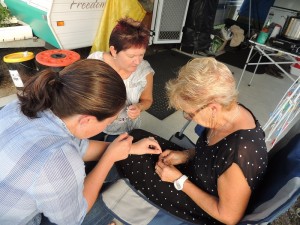 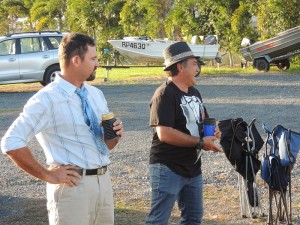 For entree Jude made Seafood Cob Dip, Pete NZ muscles, Carol good old fashioned NZ onion dip (as you can see a few Kiwis at the Park) with a few other nibbles supplied.  Main was of course Pasta, cooked by Mick (a real Italian!) Great apron too!! Karen & Steve supplied a salad to go with it, with Pete bringing over Garlic Bread. 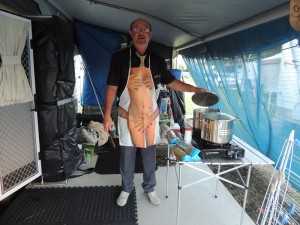 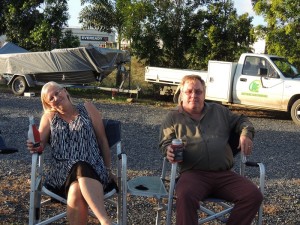 Well you would think that this more than enough food but no there was desert to come.  Darryl & Jacinta brought homemade trifle & Karen & Paul, apple crumble.  Yes, there was also the Home Brew Liquors that went into the mix as well.  Rick supplied some of his as well.  He has the answer to not having to fill his glass too often! Tui wants one!! 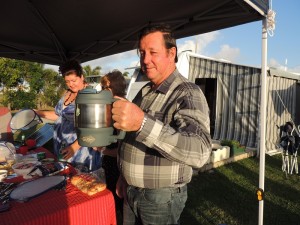 It was great to see & talk to Blair & Cam (grandsons in Perth) on Skype earlier in the day for Blair’s birthday.  For those of you who are traveling and considering Skype, we highly recommend it.  It makes you feel as if you are still a part of family events.

Mothers Day dawned and after Tui visited the Car Show with Paul, Mick, Jen, Tui & Jude headed off to the Shamrock Hotel for Lunch.  Then to Harrup Park Country Club,  an impressive sporting, dining and entertainment facility. Tui & Jude spent most of the time watching people get their hair coloured to raise money for the Leukemia Foundation. Great weekend all round.

Well once again we have run out of news.  It is quite difficult to write something exciting when we are stationery but I guess there is still a bit of content to read.