Once again we have left our blog until the last day of the month!  Time stops for no man or woman!!

Well Jude & Sydnie have continued with their outings with at the beginning of the month doing a road trip to MacKay Port.  The principal imports are refined fuel products, fertilisers and general cargo. Exports include raw sugar, refined sugar, ethanol, molasses and grain in bulk. The Port of Mackay comprises an artificial harbour formed by rock breakwaters. Land areas behind the port accommodate over 100 industrial and commercial businesses with substantial areas of vacant land suitable for further development. 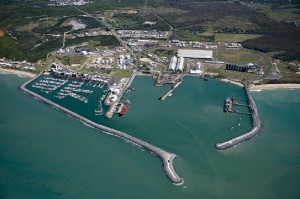 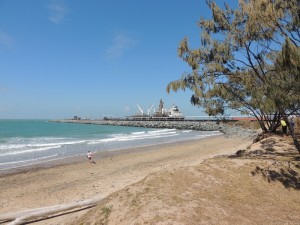 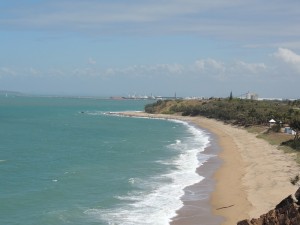 Then drove out to Slade Point, a peninsular suburb north of MacKay (population approximately 4000). Slade Point, a prominent coastal feature was named by Captain James Cook.

The view from the look out is amazing!  It was just a pity it was a bit hazy on that day.  It was then to the Seabreeze Hotel ( Right on the Beach) for a snack, drink & listen to live music.  Very good Maori singers too! 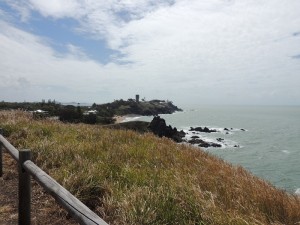 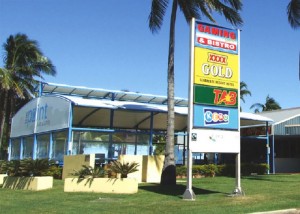 Next outing was to McEwens Beach, approx 20kms South of MacKay and only 6 kms off the highway.  It is a small beach front settlement strung along a 1.2km beach.  There is a playground, park & picnic facility but no store.  Not a problem for Sydnie as she had packed a picnic lunch for both of them.  On the beach there is a small post & wire swimming enclosure.  The water was lovely and warm but unfortunately no togs! 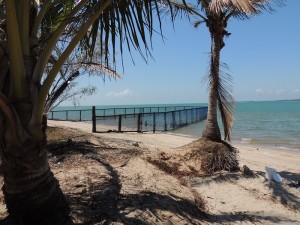 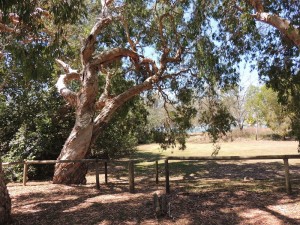 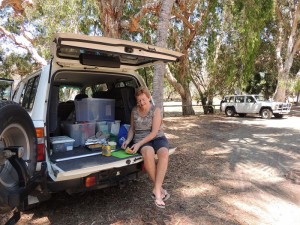 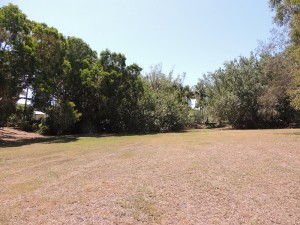 Tui had been having the odd day with no work so he decided to tick off one of the things on his “Bucket List”.  He did a day course and passed his MC (Multi Combination) License.  For those of you who don’t know an MC allows him to drive BIG Trucks i.e. B Doubles and road trains.  He says he is a “BIG TRUCK DRIVER” now!!!  LOL! 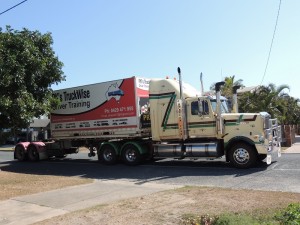 As he had left his log book behind and had to pick it up we took the opportunity of taking a quick snap of the truck he did his test in.  No trailer on it at this stage though.

Daniel who resides at the house had finished his rugby season and it was time for his prize giving night.  Man, we thought girls took a long time to get ready!!  Looking cool Daniel! 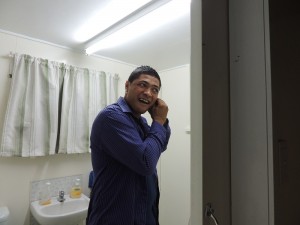 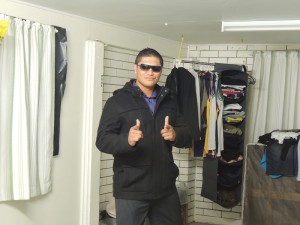 Jude has been really lucky with the friends she has made, with Lisa & Jed also taking her out to lunch one day.  Thanks guys awesome day, pity no photos!!

After having no car few a few days, Jude got a phone call from Tui to say pack up Tiki Tourer we are leaving first thing in the morning as they need a truck at Inkerman Mill, Home Hill, 300kms North, the Burdekin region of Queensland. “Murphy’s Law”  no beer in the Engel, no fruit & veg, no milk, no bread etc.  Oh well, shops up there I guess!!  Heading off from MacKay we managed to get a photo of the chaser unloading into the Cane Wagons, then one of the Big mango at Bowen. 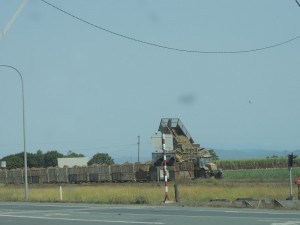 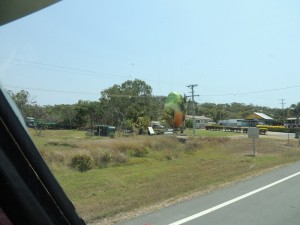 We had stayed a night at Home Hill Comfort Stop, a free camp, on the way down to MacKay and quite liked the town.  Also our mates Jen & Mick had jobs there and were staying around 6 weeks.  They are camped about a km away at a friends place.  Cool!!

Deciding not to take our trailer we loaded the Suzi into the trailer of the truck, keeping fingers crossed we could find somewhere to unload.  John drove the truck & Tui drove, Tiki Tourer.  John works the night shift and Tui the day.  First day was induction day finding out that Tui was to have a 4am start which meant getting up at 3am!!  Great!!  At least he gets home in the daylight!

We are camped at the Home Hill Caravan Park, a very small but very friendly park.  Quite a few of the guys here work at the Mill.  The Olympic Pool is right next door and we have full use of the facilities.  Bonus!!  Jude has been walking every morning and then doing quite a bit of swimming as well. It is the first port of call when Tui gets home.  A toss up between a beer first or a swim!! 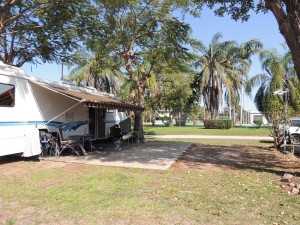 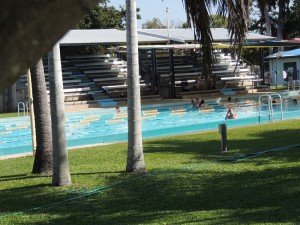 John has a cabin which is close to Tiki Tourer.  Nice cabin with air con and his own shower & toilet.  We don’t see much of him at all with him sleeping all day and working nights. As you can see Suzi has it’s own carport!! 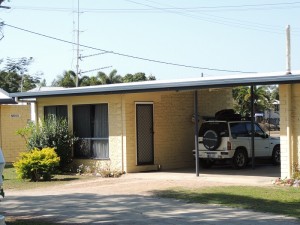 Friday night Jen & Mick came down for “Happy Hour”, it had been a long time between drinks with them and we had a great night.  Calling & texting the gang that used to congregate at their van in MacKay.  Sunday they picked Jude up and it was off to the Commercial Hotel for a $10 Sunday Roast Lunch , followed by Sea Horse Racing!  Yep, you read right, Sea Horse Racing!!  Lots of fun!  The dice is passed around the bar to select which Sea Horse moves forward, then an electronic device randomly selects the amount of spaces it moves.  If you are lucky enough to draw a Sea Horse and it comes first you win.  Plus there are draws in raffles etc.

A drive out to Groper Creek followed.  Groper Creek was just a tidal inlet until the floods of 1918 made it one of the mouths of the the Burdekin River, one of the largest river systems in Queensland.  It is 17kms south of Home Hill. Today the small fishing community’s population is made up of around 50 permanent residents, mostly being retirees. In holiday seasons the population balloons to over 300 with visitors flocking to the caravan park located on the bank of Groper Creek. Many of the visitors come to take advantage of local fishing and crabbing. 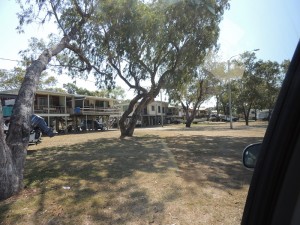 We just did a quick drive around so didn’t get many photo opportunities.

The Burdekin is one of the last remaining areas in Australia where green cane is burnt before harvesting to remove excess leaves known as cane trash. With flames jumping into the air it is a feast for the eyes.  The ash from the cane is thrown high into the sky often travelling hundreds of metres even kilometers before spiralling down to earth.  Locals commonly refer this as “Burdekin Snow”. It gets everywhere, even through the fly screens!!  Last night we saw some fires so Tui was on a mission to get some photos.  It is amazing the short amount of time it burns for.  Might get some better photos another night. 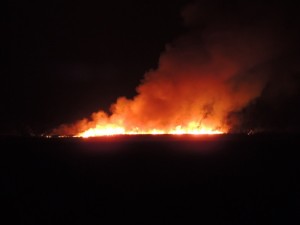 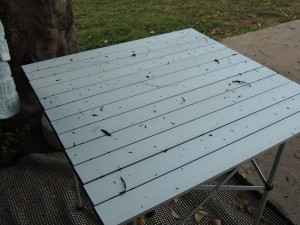 Another day off today so we went for a drive.  1st stop Inkerman Hill Lookout.  It is 214 m above sea level and you can see for miles!! Once again a hazy day and then the battery went flat in the camera. 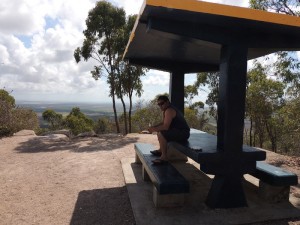 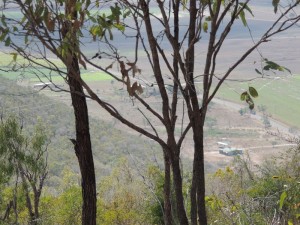 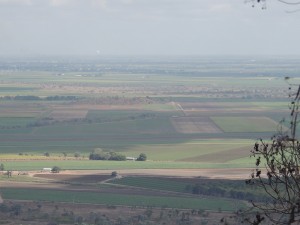 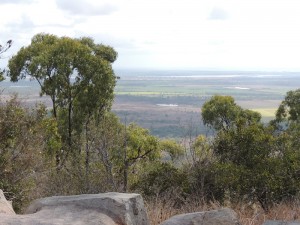 It was them a drive to Ayr to check out the shops.  We will write a bit more about Home Hill & Ayr in the next Blog.  Until then “Laugh more, live longer”