Well we are not moving far these days are we? Still at Mossman Caravan Park and Tui is now flying solo in his Microlight.  Yep, he has bought one! Maybe modifications on the trailer next! 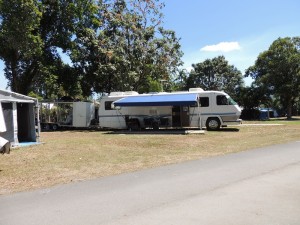 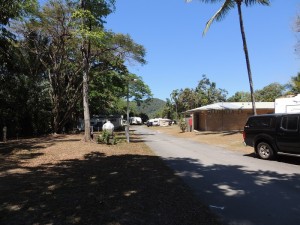 Tui’s Microlight license is far more involved than he thought it would be.  Quite a lot of learning and paperwork, but as luck would have it, Jeff, who is camped next door to us is a pilot. Tui chats to him frequently, asking questions!  Good on ya Jeff! 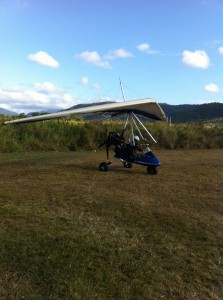 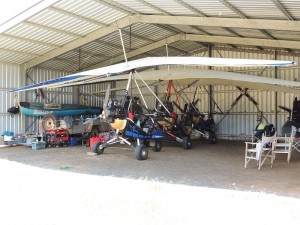 As Tui was flying everyday Jude decided on the “Spur of the Moment” to visit family in New Zealand, suprising her sister, and what a surprise it was!  The look on her face was priceless!  Funnily enough she had just decided to sell her antique unit and fly to Queensland to surprise Jude.  It would have been funny if they had passed mid flight! 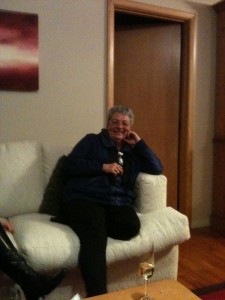 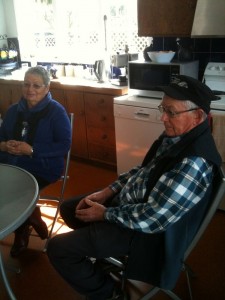 Jude packed the charger for the camera but she left the camera behind so the photos were taken on her iPhone.  Quality is not as good as normal!  On arriving at her sons place, Ella & Max (Grandies) had made a “Welcome Nana” sign! Cool! 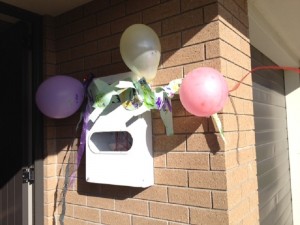 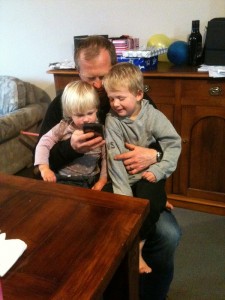 Although it was great to see the family, it was not a good time of the year to visit!  Rain everyday, cold, windy and after a few days Jude got a bad case of the Flu, which put a bit of a damper on things.  Still managed to plant lettuces, go to the park etc. 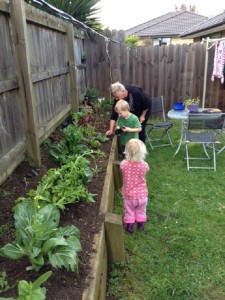 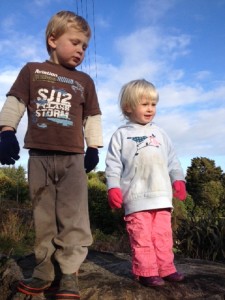 The second weekend Janine & Bob (sister & brother-in-law) took Jude in their Motorhome to Sandra’s (niece) in Matamata.  Stayed a couple of nights and caught up with Lesley, Darryl & boys, having a pot luck tea on the Saturday night.  Yum! Home killed mutton ( called lamb in Aussie) & real Kumera’s (NZ sweet potato)!!! It was so cool to see them!! Check out Jude’s bedroom with the fire! 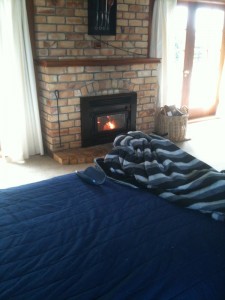 It was then back up to Pukekohe to stay for the last few days.  A real big surprise as Jude’s brother & sister-in-law (John & Jan) traveled down in their Motorhome and stayed a couple of nights to catch up!  Jude was most impressed!  Lovely to see you guys and very honoured you made the 5hr trip!

Jude really missed Tui and there were quite a few phone calls back & forth! 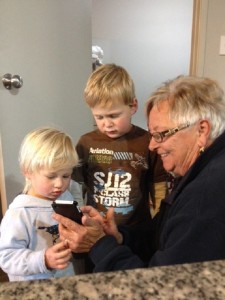 The last night we all converged on Brian & Trish’s (nephew & niece) for a Pot Luck Tea, it was also Janine & Bob’s anniversary. 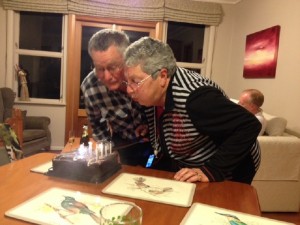 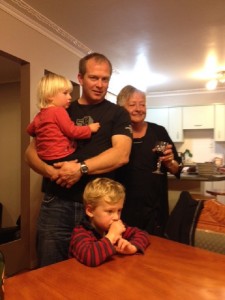 Jude was very spoilt, getting a lovely photo album from the kids, Kiwiana tea towels from Lesley, top from Sandra & a Motorhome charm from Janine!  Not too good flying back with the Flu, with a stop over in Brisbane, Jude had 2 landings to cope with!  It felt like her head was going to explode! Perhaps Perth next time to visit family & friends there!

Jude arrived back in Mossman to 30+ degrees, a huge change from the temperatures in NZ, with a low of 3 one day. Friday night it was off to the Exchange Hotel for tea with mates Carolyn & Charlie (surname of Toohey, would you believe?).  It was Karaoke night in the bar so Charlie, Carolyn & Tui got up to sing!  Jude was photographer but unfortunately the photos were a bit blurry on Tui’s iPhone!

Thanks Tourism Australia for the Photo. 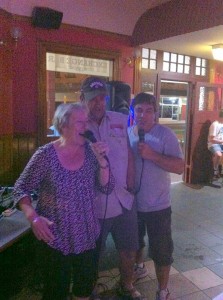 The Exchange Hotel, is the second timber hotel to stand on the prominent site at the corner of Front and Mill streets in Mossman, a sugar town located about 75 km north of Cairns. Built in 1934-35 to replace the first Exchange Hotel (c1896), which was badly damaged in a March 1934 cyclone, the second Exchange Hotel was designed to appeal to a tourist clientele.  Great food too!

Sunday night a whole group of us went to the Bowls Club for tea.  Wow!  2 nights out in one week!!  Food is great and cheap there too. 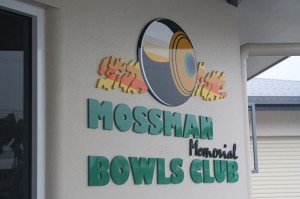 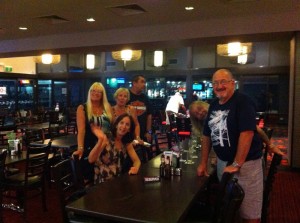 Tui had a phone call while Jude was in NZ to say the new awning was ready AT LAST!  Wednesday we headed back up to Mareeba to have it fitted.  Bit disappointed as it isn’t anywhere near as solid as our old one & the side walls still aren’t done! Better colour though!!  We caught up with friends at The Mareeba Rodeo Grounds, staying there 2 nights. 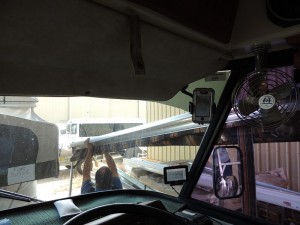 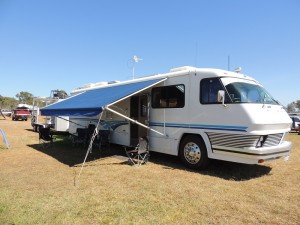 Last Saturday it was “help Charlie put his air con in day!” While Carolyn was at work and the boys were doing the air con, Jude looked after our mate Joe (the dog).  He seems to have made our place his 2nd home.  Guess it helps that Tui gives him treats! 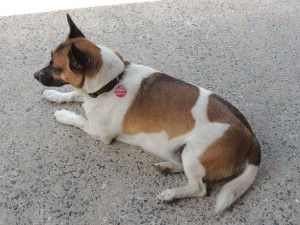 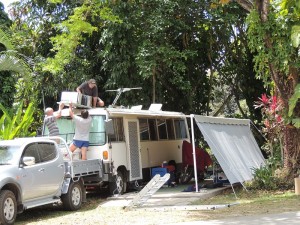 Charlie & Carolyn asked us to join them on Sunday for lunch at “The Tin Shed” in Port Douglas.  Great day, great company, lots of laughs & great food!! Could really get used to this! 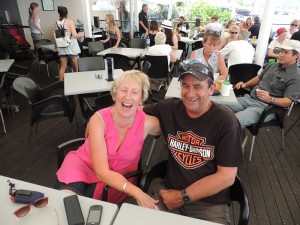 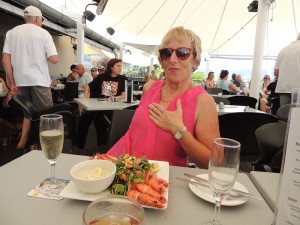 We were entertained by a Kiwi couple and had a good chat to them during their break.  Great music which really added to the atmosphere! 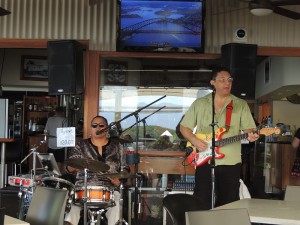 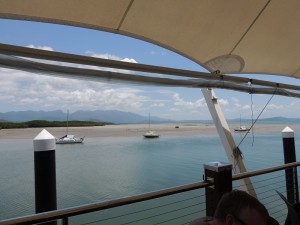 Time for a Charlie Tiki Tour, visiting a pirate ship and an old Bomb site. 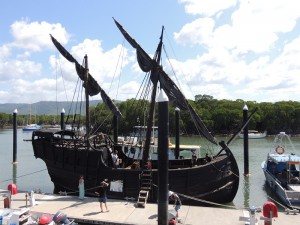 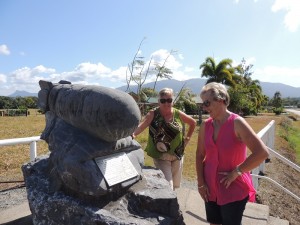 On the 31 July 1942 a lone Japanese aircraft dropped a total of eight bombs over the Mossman area. One exploded in a cane field about 50 metres behind the site of the memorial, causing damage to the Zuilo family farmhouse and injuring two-year-old Carmel.

Last night, in perfect weather and clear skies,  we witnessed the total lunar eclipse. A total lunar eclipse occurs when the Earth is perfectly aligned between the moon and the sun, with the moon hiding behind Earth in its unbra. Lunar eclipses aren’t especially rare — definitely not as rare as solar eclipses — and there are four total eclipses happening in the next 16 months, in what astronomers refer to as a tetrad. It was quite cool! 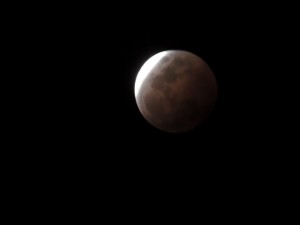 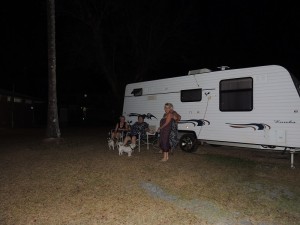 Well, that’s about all this month.  We hope everyone is fit & well and enjoying life!

One Response to Mossman – October 2014