Like everyone there are certain things that we deemed necessary before embarking on our big trip.

The biggie for us was education!!  When we picked Tiki Tourer up from Melbourne and drove back to Perth we didn’t even know how to fill the fresh water tank!!  You sure learn a lot through trial and error and also from others that have been there and done that.

The most scary lesson we learned was that when a wide load is coming toward you and the side of the road slopes into a drain, and it had had a lot of rain, you never pull over too far, still travelling at 60kms an hour.  Instead you do your utmost to stop somewhere safe well ahead of time.  We thought we had lost the Bus and ourselves.  A close call!!

As members of the CMCA (Campervan & Motorhome Club of Australia) we had access to not only the information from the clubs web site www.cmca.net.au and members, but it gave us the opportunity to go to local Rallies and talk to the members and join in on some fun. 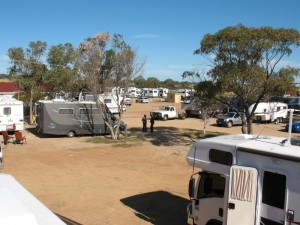 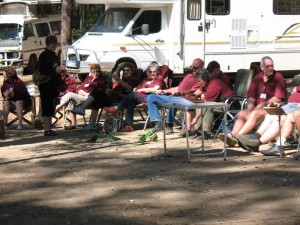 Another fantastic Web site that has helped us is www.hobohome.com. Tracy & Gavin have been travelling Australia for over 7 years and share a wealth of knowledge and articles relating to motorhoming and caravanning around Australia.  A worthwhile visit!

Initial thoughts were, we need more battery power, decent TV, perhaps Solar panels or should that be wind generator power, a trailer, Dingy, new tyres, internet (for my work) etc. We thought would just make a few enquiries and just get what we needed!!  Wrong!! Confusion set in on many levels as every Company we talked to had different ideas. Hence the best source of knowledge, we have found, is talking to those who are doing it.

Changing the Bus from Victorian Plates to WA plates was no easy feat either.  Organisation of a permit to drive it for inspection was the 1st step.  Tui left home at 6am so he would be 1st in line.  All was pretty good except a leak in the air line, which Tui duly set off to get fixed.  Back to the inspection centre and the computers had gone down.  Oh my, what a lot of angry people waiting.  Finally got the all clear and into the office to get the paperwork done.  Extra information required so a VERY tired and angry Tui arrived home after 4pm.  After collection of relevant material Jude was able to finalise the paperwork next day and Yippee!!, We were finally legal with WA Plates.

Our next mission was, what do we call our new purchase?  After several emails to family and friends we decided on Tiki Tourer.  A common term used in NZ when you drive to look at places “you go for a Tiki Tour!!” 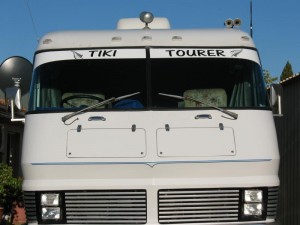 Now you can’t cart all your gear on a tour of Australia without a trailer.  See the Trailer page.

It is now getting closer to departure and still so much to do! We have now purchased a Printer, copier, scanner to connect to the Laptop, worked out where we will place it in Tiki Tourer so the next step was to install a cupboard to keep it secure. We were lucky enough to purchase one that matched the interior woodwork nicely, then Tui secured it into place.

The decision on what Solar Panels was a continuing process.  Firstly we installed a solar panel on the trailer with 2 batteries and an inverter inside our trailer cupboard to run an extra Fridge/freezer. This is totally independent and Tui is hopeful of filling it with fish at some stage.  This panel worked really well so we decided to purchase another 3 for Tiki Tourer. As you have probably seen on our Posts this turned out to be quite a saga. With not much time to spare we duly ordered them, thinking that we would receive them in time before departure.  The Panels arrived, however one was definitely 2nd hand and all panels were different.  After several phone calls and emails Solar Energy Store had a courier pick the Panels up and reshipped a new set.

With Easter fast approaching the concern was they wouldn’t arrive prior to the long weekend, which in fact did happen.  We set off to Stockton Lake for the long weekend, back home but still no panels.  Decided to head off to Calingiri anyway and we were only 30mins away from our destination when we received a text to say they had arrive.  To cut a long story short they are now installed and full operational. 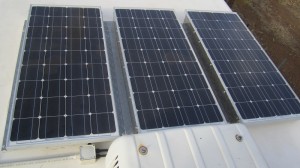 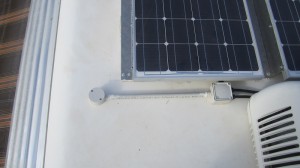 Phone and internet coverage was a difficult one.  Do we go manual Satellite for the internet or stick with Telstra Next G with a booster aerial.  We have now made the decision based on cost.  A Next G WiFi modem with a high gain Yagi aerial has been installed, also a booster aerial for the mobile phone. Coverage so far has been great. We use Skype nearly everyday and have found it to be a great asset. It enables us to be part of what is going on and it is amazing the difference it makes being able to see who you are talking to and also see what is going on around them. 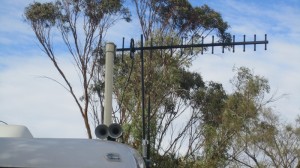 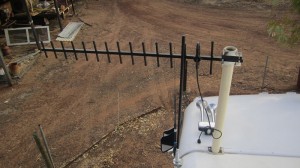 2 Responses to Getting ready