We had heard so much about Cliff Head that we thought we would spend a week there, between Christmas and New Year.  Also Tui wanted to take the new Trailer on it’s first big run.  Well, what a trip!!  Travel time is normally 4hrs from our place and 9 hours later we finally pulled in, as the sun was setting. 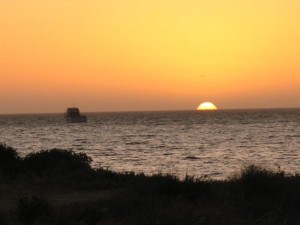 The trailer wheels kept getting extremely hot, in fact so hot you couldn’t touch them! At one stage we stopped in a Rest Area and Tui took all the wheels off and checked the grease amounts as one helpful passer by said he thought we had too much grease in the bearings.  While Tui was stating to take off the wheels, Jude backed the Suzuki off the trailer and set off for the nearest service station to purchase some grease. Unfortunately that wasn’t the problem!  Checks were done in the control box, wiring and everything else we could think of and still no luck.  In desperation Tui decided that we would just carry on and worry about it when we got there. 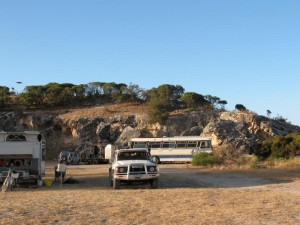 Fantastic welcome when we arrived!  Had hardly turned the Motor off when we were invited to Happy Hour, which by this time, Jude especially needed!!

Next morning all of the men that were camped there had a big pow wow to figure out what the problem was.  None of the proposed solutions worked even when everything was disconnected the heat remained.  It wasn’t till a few weeks later when we were home that the problem was solved. The trailer wasn’t earthed correctly!! 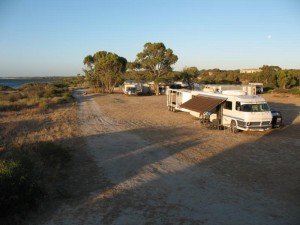 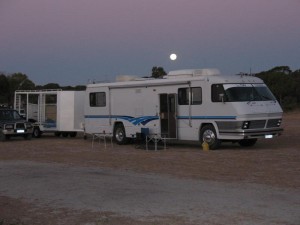 Friends Jock & Annie were great fun.  After a bit of conversation we discovered that Jock & Tui had a mutual fiend in Cairns.  Another Trail Bike fanatic!  Small world!! 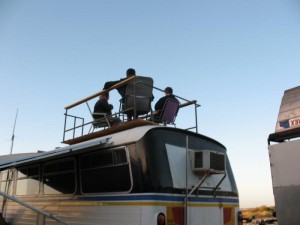 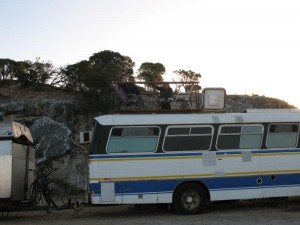 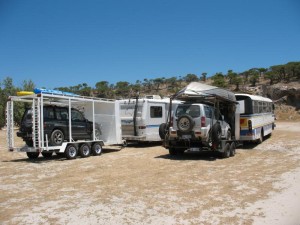 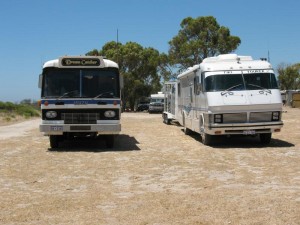 We decided to pack up and leave the same day.  All set to go. We stopped at Eneabba to check everything and Jock & Annie pulled in behind us.  Tui noticed that Jock’s rear tyre looked a bit odd on his bus and on further inspection discovered the inside dual was flat.  An hour later they had the tyre changed and we were off again. 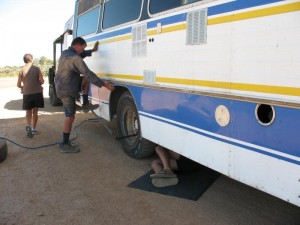 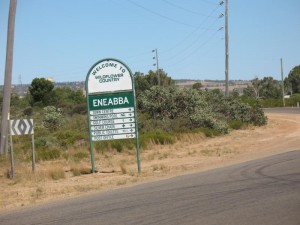 After a big day we thought “what the heck, we will spend the night together at Badgingara Camping Ground.  Headed off next morning and stopped at Regans Ford to empty out at the Dump Point and have lunch.  We then headed our separate ways. 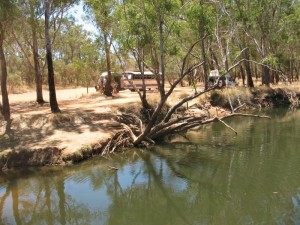